Full Text
May 1945
Haliburton Airman Released from Prison Camp
Among the large number of R.C.A.F. prisoners released lately from a German prison camp is W.O. Merrill George Bailey, of Haliburton. He was released by the advancing Allied army. His wife resides in Haliburton.


May 9, 1945
Freed From Nazi Prison
A Haliburton boy, W.O. Merrill George Bailey, is one of 133 fliers to be named in the first RCAF list of Canadian airmen held prisoner by the Germans and liberated by the advancing Allied armies. His wife, Mrs. M. G. Bailey, lives in Haliburton.


June 1945
REPORTED SAFE
Picked up by a German ship and taken prisoner after his plane had crashed into the North Sea, killing five of its crew on June 29, 1942, WO. Merrill George Bailey, of Haliburton, Ont., has now been liberated and returned to England, according to information received by his wife, Mrs. Muriel Bailey, of that village.


No date.
Mr. and Mrs. W. G. Bailey, of Eagle Lake and Mrs Muriel Bailey have received cables this week from W.O. Merrill G. Bailey, saying that he is now serving in England.
W.O. Bailey enlisted in 1940 and has been a prisoner of war since June 29th, 1942. His parents and his wife and friends were glad to receive the message that he would soon be home. In the cable to his . . . wounds. Latest word is that he is being transferred to England. [end of record]


June 2, 1945
Mrs. M. G. Bailey is at Lachine, Quebec, where her husband is a patient in a hospital. On arriving in Canada he was taken ill. W.O. Bailey expects to be in Haliburton in a week. His condition is not serious.


July 31, 1945
HALIBURTON
W.O. Merrill G. Bailey who returned from a P.O.W. camp in Germany has now been released from the R.C.A.F., and is resting at his home in Eagle Lake.
Media Type
Newspaper
Text
Genealogical Resource
Item Types
Articles
Clippings
Notes
This card is part of a larger collection of World War II personnel clippings. The project began in 1944 at the Lindsay Library. The intent was to gather together as much information as possible on the military record and the service of people from the Town of Lindsay and the County of Victoria (now Kawartha Lakes)who served in the war. To that end, during the years 1944, 1945, and 1946, members of the public donated photographs and updated information about their loved ones. Both library staff and the public saved and donated newspaper clippings. Some of the files contain great amounts of detail, while others have just a name.
Date of Publication
1945
Subject(s)
Capture & imprisonment
Military life
Nazis
Prisoners of war
Rescues
Soldiers
World War II
Royal Canadian Air Force, RCAF, 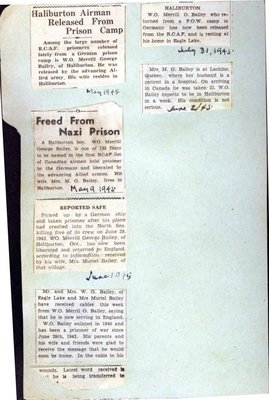