Full Text
June 14, 1944
Cpl. M. Balfour Welcomed Home
A happy reunion took place in Toronto at the exhibition depot when Cpl. Melville Balfour of the S. D. and G. Highlanders was met by his parents Mr. and Mrs. Geo. Balfour, 23 Wolfe St. Lindsay, and sisters Mrs. Geo Warren (Ruth) and Mrs. John Donald (Muriel) and their husbands.
Also on hand to welcome Mel home was his brother Pte. Walter of the Convalescent Hospital, Brampton who arrived home from overseas two months to the day. Mel and Walter had not met while overseas so there was great rejoicing when the two brothers met for the first time in four years.
A grand reception took place at the home of his sister and brother-in-law Mr. and Mrs. Geo. Warren, Toronto.
After returning to Lindsay he was met at the station by his pastor Rev. Mr. Searle and other members of the William Street Baptist Church.
Another reception was given to Mel by his brother and sister-in-law Mr. and Mrs. Norman Balfour. A beautiful table was laid and the centre was adorned with a lovely cake bearing the words Welcome Home Mel.


April 19, 1945
HEAR SON WOUNDED ON GERMAN FRONT
Lindsay Lad Casualty as Brother Arrives Home on Leave from Europe
Lindsay, April 19 (Special) – The day after their son, L.-Cpl. Walter G. Balfour, returned home from overseas, Mr. and Mrs. W. E. Balfour received information that another son, Cpl. Melville Earl Balfour, had been wounded for the second time while fighting in Germany.
Cpl. Melville Earl Balfour enlisted with the Stormont, Dundas and Glengarry Highlanders at Peterboro [Peterborough] in July, 1940 and trained at that city, Kingston, Ottawa, and Defert (N.S.), before going overseas in July, 1941. He took part in the invasion on D Day, and was first reported wounded at the battle for Caen.
Lance-Cpl. Walter G. Balfour enlisted at Toronto with the Lincoln and Welland Regiment in April, 1943 and trained at Brantford, Barriefield and Camp Borden, going overseas in April, 1944. He served in Holland and France four times before returning home. Before enlisting he was employed by Lever Bros., Toronto.


June 13, 1945
CPL. M. BALFOUR IS WELCOMED ON ARRIVAL
A happy reunion took place in Toronto at the Exhibition Depot when Cpl. Melville Balfour of the S. D. and G. Highlanders was met by his parents, Mr. and Mrs. G. Balfour, 23 Wolfe St. Lindsay, and sisters Mrs. Geo Warren (Ruth) and Mrs. John Donald (Muriel) and their husbands.
Corp. Melville Earl Balfour has been wounded for the second time, the casualty taking place in Germany. No details are to hand.
The Balfour Brothers, who have been in the war for four years, unfortunately were not able to meet overseas during the entire period.
Media Type
Newspaper
Image
Text
Genealogical Resource
Item Types
Photographs
Articles
Clippings
Notes
This card is part of a larger collection of World War II personnel clippings. The project began in 1944 at the Lindsay Library. The intent was to gather together as much information as possible on the military record and the service of people from the Town of Lindsay and the County of Victoria (now Kawartha Lakes)who served in the war. To that end, during the years 1944, 1945, and 1946, members of the public donated photographs and updated information about their loved ones. Both library staff and the public saved and donated newspaper clippings. Some of the files contain great amounts of detail, while others have just a name.
Date of Original
1944-1945
Subject(s)
Military life
Military service
Soldiers
Soldiers' homes
World War II
Soldiers -- Wounds and injuries
Furloughs
Stormont, Dundas and Glengarry Highlanders
Lincoln and Welland Regiment 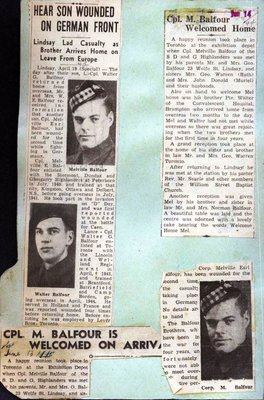