Full Text
October 18, 1944
Mr. and Mrs. W. G. Balfour, 23 Wolfe St., are justly proud of their two soldier sons, Pte. Melville Earl Balfour and Pte. Walter Balfour, both of whom have been wounded. Pte. Melville Balfour, who went over with the Stormont, Dundas and Glengarry Highlanders, a regiment specially trained for the invasion, writes that he is now out of the hospital, following his wounds received in France and is ready for "more action." He has been given an extra stripe for bravery on the field of battle. Pte. Walter Balfour enlisted before he became of age, [and] received his training in Toronto, Brantford, Camp Borden and because he was under age he was sent to Kingston to complete a special course. On reaching the age of 19 he was sent overseas and there joined his old regiment from Lincoln and Welland. On arriving in England he was immediately sent to France and was wounded on August 19, by a sniper who tagged his left shoulder.
Both brothers were born and raised in Lindsay.


November 16, 1944
Recovering From Injury
L.-Cpl. Walter Balfour who was recently wounded in action on the Holland front is now reported to be recovering from a bullet wound in the 30th British General Hospital in Holland.
Friends here will be interested to note this information.


January 31, 1945
Lindsay Boy Wounded For Fourth Time
Mr. and Mrs. W. G. Balfour have just received official word that their youngest son, L.Cpl. Walter George Balfour was wounded on Jan. 26th for the fourth time since going into action on the continent. The nature of his wounds this time are not yet available.
L.Cpl. Balfour was wounded for the third time on October 29. At that time he was one of 13 Canadians who fought off hordes of Nazi paratroopers in a 16 hour battle which raged around a deserted factory in which the Canadians were barricaded.
One older brother, L-Cpl. Melville Balfour, was wounded but is now back with his unit.
This would seem to constitute a record as far as fighting men from Lindsay is concerned.

LINDSAY BOY WOUNDED FOR FOURTH TIME
Mr. and Mrs. W. G. Balfour, 23 Wolfe St., town, have received word that their son, Lance Corporal Walter Geo. Balfour, has been wounded for the fourth time. No details are to hand. L-Cpl. Balfour has had considerable experience on various battle fronts.
Media Type
Newspaper
Image
Text
Genealogical Resource
Item Types
Clippings
Articles
Photographs
Notes
This card is part of a larger collection of World War II personnel clippings. The project began in 1944 at the Lindsay Library. The intent was to gather together as much information as possible on the military record and the service of people from the Town of Lindsay and the County of Victoria (now Kawartha Lakes)who served in the war. To that end, during the years 1944, 1945, and 1946, members of the public donated photographs and updated information about their loved ones. Both library staff and the public saved and donated newspaper clippings. Some of the files contain great amounts of detail, while others have just a name.
Publisher
Watchful Warder
Date of Original
1944-1945
Subject(s)
Military life
Military training
Recruiting & enlistment
Soldiers
Soldiers' homes
World War II
Soldiers -- Wounds and injuries
Stormont, Dundas and Glengarry Highlanders
Lincoln and Welland Regiment
4th Armored Division 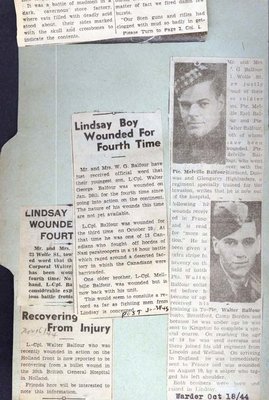