Full Text
April 30, 1943
Pte. Garfield Barjarow, R.C.A.S.C. of Camp Borden, is spending his furlough at the home of his parents, Mr. and Mrs. A. Barjarow, Victoria Ave. N.


July 6, 1943
Mr. and Mrs. Albert Barjarow, received a cable to-day from their son Garfield saying that he has arrived safely in England and is well.


August 10, 1944
Pte. Barjarow Is Recovering From Injuries
Mrs. A. Barjarow of 77 Victoria Ave. N., advised the Post this morning that her son Pte. Garfield Barjarow, who was recently wounded, is now well along the road to recovery.
Pte. Barjarow wrote his mother a few days ago and relates that he has had an operation successfully performed on his left arm during which time shrapnel was removed.
He states that his arm is now in a cast and that he is feeling fine and hopes soon to be up and at them again.


September 27, 1944
Pte. G. Barjarow Among the Wounded
Mrs. Barjarow, Victoria Avenue north, Lindsay, has received official confirmation from the Record Office at Ottawa, that her son, Pte. Garfield Barjarow, 21, has been wounded in France. Pte Barjarow worked at Fee Motors and Robson’s Grocery in Lindsay before enlisting with the 17th Light Field Ambulance Corps at Kingston in October 1942. Following training at Camp Borden he went overseas in June 1943.
Pte. Barjarow was born in Lindsay, attended public school here and was a young man quite popular with those with whom he came in contact. His home is on Victoria Ave. North.
Media Type
Newspaper
Image
Text
Genealogical Resource
Item Types
Clippings
Articles
Photographs
Snapshots
Notes
This card is part of a larger collection of World War II personnel clippings. The project began in 1944 at the Lindsay Library. The intent was to gather together as much information as possible on the military record and the service of people from the Town of Lindsay and the County of Victoria (now Kawartha Lakes)who served in the war. To that end, during the years 1944, 1945, and 1946, members of the public donated photographs and updated information about their loved ones. Both library staff and the public saved and donated newspaper clippings. Some of the files contain great amounts of detail, while others have just a name.
Publisher
Watchful Warder
Date of Original
1943-1944
Subject(s)
17th Light Field Armored Corps
Canadian Forces Logistics Branch
Military service
Royal Canadian Army Service Corps
Soldiers
Soldiers -- Wounds and injuries
World War II
Furloughs 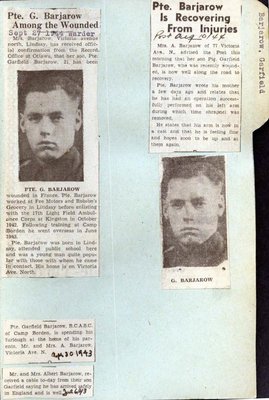