Full Text
No date [1944]
RUG, MADE BY HAND IN GERMAN PRISON CAMP, IS SENT TO LINDSAY MOTHER
Cpl. Lawrence Barjarow, Made Rug While in German hospital, Suffering the loss of an Eye---Rug on Display in Warder Window
Mrs. Annie Barjarow, 46 St. Paul St., Lindsay, received a somewhat unique souvenir of the war by parcel post last week — a beautiful rug 4 feet square, which was made by her son, Cpl. Lawrence Barjarow, of the 2nd Field Engineers, Toronto, while he was a casualty in a German prison camp, following the raid at Dieppe.
In the raid on Dieppe young Barjarow was unfortunate to lose one eye. He was taken a prisoner of war by the Hun and it was while in the hospital and in prison camp that he made the rug. He developed his own pattern.
The rug was hooked by Cpl. Barjarow. It is over an inch thick and well designed as to pattern and colours. In the middle appears the crest of the 2nd Field Engineers and the words BAD 1944 SODEN and close to the crest are the names of four war causalities, who lost one or two eyes. They are: Jim, Larry, Arthur and Len.
Long before Cpl. Barjarow was repatriated he gave the rug to a friend to bring home to Canada. In moving about from one place to another the rug was lost. The friend felt so badly about the loss of the rug that he placed the matter in the hands of the Military Police. They traced the rug and finally located it, sending it to the friend in Cornwall, who in turn forwarded it to the Barjarow home in Lindsay this week.
Barjarow has been in Toronto endeavoring to satisfy himself as to a position to occupy his future time and become his vocation.

January 1945
Official word has been received by Mrs. Blanche Bargerow [sic], who has been a prisoner of war in Germany since the battle at Dieppe, is expected home shortly. Cpl. Barjarow enlisted in 1939 and went overseas with the Royal Canadian Engineers. Cpl. Barjarow's Haliburton friends rejoice with Mrs. Barjarow and family in hearing this good news.
Media Type
Newspaper
Image
Text
Genealogical Resource
Item Types
Snapshots
Photographs
Clippings
Articles
Notes
This card is part of a larger collection of World War II personnel clippings. The project began in 1944 at the Lindsay Library. The intent was to gather together as much information as possible on the military record and the service of people from the Town of Lindsay and the County of Victoria (now Kawartha Lakes)who served in the war. To that end, during the years 1944, 1945, and 1946, members of the public donated photographs and updated information about their loved ones. Both library staff and the public saved and donated newspaper clippings. Some of the files contain great amounts of detail, while others have just a name.
Publisher
Watchful Warder
Date of Publication
1944
Subject(s)
Capture & imprisonment
Military police
Military service
Nazis
Prisoners of war
World War II
Rug Hooking
Dieppe Raid, 1942
War - Anecdotes
2nd Field Engineers 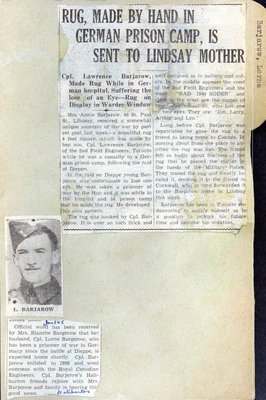