Full Text
May 29, 1945
LINDSAY MANY SAYS GERMANS HARD MASTERS
Two Slices of Black Bread Daily and Watery Potato Soup Starvation Diet While Held Captive
We thank the Red Cross for the fact that some of us as prisoners of war in Germany escaped with our lives. Certainly what the Germans gave us to eat would not have kept us alive, said Cpl. Lorne Barjarow, son of Mrs. Chas. Barjarow, St.Paul St., here, in an interview today. Cpl. Barjarow has recently been repatriated to Canada after nearly three years in a Nazi prison camp.
Enlisting in the Canadian Army on March 5, 1940, with the 2nd Co. Field Engineers he was taken prisoner of war on August 19, 1942.
I remember that date very well, said Cpl. Barjarow today, it was then that we raided Dieppe.
Asked when he was released from his Nazi captors, Cpl. Barjarow said that freedom came on April 14. "It was then," he continued, that a spearhead of General Patton's Army made contact with our camp.
We were, treated well after our American liberators arrived, he stated, but before that it was terrible.
Referring to the rations which the Nazis meted out in his particular camp, he snowed your reporter a metal tray about three inches long by one inch wide. This tray he later explained was sort of a gadget for measuring solid rations, such as bread and etc. We were given two pieces of black bread approximately one-eighth of an inch thick to last us for a 24-hour period. This was supplemented with some soup -- so-called potato soup to be exact, but if any of the boys ever found a piece of potato in it they were lucky.
Still commenting on the hard-ships which they endured under the Nazi heel, he said, I have seen our boys after the garbage had been sent out, salvage potato peelings from it and boil them so as to save themselves from slow death by starvation. We were more than thankful when our Red Cross parcels arrived because it gave us new hope and something substantial to carry on with in the way of bodily nourishment.
Asked if he thought Nazi atrocity pictures which were currently being shown in theatres throughout the country were exaggerated, Cpl. Barjarow said, From what I have seen and heard of them, they are only too true in their portrayal of Hun brutality.
Cpl. Barjarow plans to spend a lengthy leave visiting with his mother here and other relatives and friends in Toronto and Haliburton. On his arrival in Lindsay he was welcomed by his mother and family.
Just before the interview ended, Cpl. Barjarow, in an attempt to give your reporter some idea of how it felt to have once been a prisoner of the Germans, said, Every time I see a canary in a cage now, I feel like letting it out.
As a parting shot he showed some German currency and coins he had in his possession and said, I want to hang on to these because every time I look at it, it gives me the urge to curse my one-time captors.
Media Type
Newspaper
Image
Text
Genealogical Resource
Item Types
Snapshots
Articles
Clippings
Notes
This card is part of a larger collection of World War II personnel clippings. The project began in 1944 at the Lindsay Library. The intent was to gather together as much information as possible on the military record and the service of people from the Town of Lindsay and the County of Victoria (now Kawartha Lakes)who served in the war. To that end, during the years 1944, 1945, and 1946, members of the public donated photographs and updated information about their loved ones. Both library staff and the public saved and donated newspaper clippings. Some of the files contain great amounts of detail, while others have just a name.
Publisher
Lindsay Post
Date of Publication
29 May 1945
Subject(s)
Capture & imprisonment
Interviews
Military service
Nazis
Prisoners of war
Punishment & torture
World War II
Rations
Dieppe Raid, 1942
War - Anecdotes
2nd Field Engineers 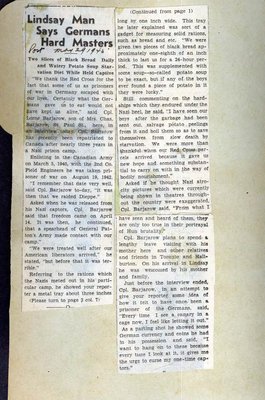