MISSING
Lance Corp. Lome M. Barjarow, son of Mrs. J. Barjarow, 40 St. Paul St.
Blanche Gregory, wife of Lance Corp. Barjarow, who lives at Haliburton, with her family of five small children, has received word that her husband is reported missing. Lorne Barjarow, well known in Lindsay, a former employee of the Kawartha Lumber Company, enlisted as a member of the Royal Canadian Engineers, Toronto. He had two short leaves home before embarkation and has been almost three years in England. His mother, Mrs. J. Barjarow, 40 St. Paul St., was in Toronto when the message was received. Another brother, C. Isaac (Gunner) Barjarow, has also been in England for a long time. Three other brothers fought in the last Great War, two of whom paid the supreme sacrifice.


September 16, 1942
Lindsay and District Men, Dieppe Raid
This district was represented in the recent invasion at Dieppe, the honour roll including three soldiers from Lindsay, one from Nestleton and another from Cannington. They are:
Lawrence Milton, Act. Lance Corp., Royal Canadian Engineers; missing. Mrs. Blanche Barjarow, wife, Lindsay, Ont.

HUSBAND'S LETTER SAYS HE'S PRISONER
The following, from the Toronto Star, refers to a Lindsay soldier whose family resides on St. Paul St.:
Mrs. Barjarow of Haliburton, wife of Corp. Milton Barjarow, Royal Canadian Engineers, received word yesterday from her husband that he is a prisoner of war.
Previously reported missing after the Dieppe attack, Corp. Barjarow wrote from a German hospital that he was not seriously wounded. The letter was forwarded by the International Red Cross.


January 20, 1943
"NO NEED TO WORRY" SAYS DIEPPE RAID PRISONER IN LETTER TO MOTHER HERE
The following airmail letter kindly handed to us for publication is from Cpl. L. M. Barjarow of Lindsay and Haliburton, to his mother in Lindsay. Cpl. Barjarow was taken prisoner in the Dieppe Raid. A brother Chas. (Ike) is a gunner in the 45th Reg't. England. Letter written Nov. 17 was received yesterday, Jan. 18.

November 17, 1942
Dear Mother:—
Just to let you know I am getting along fine and there is no need to worry. Getting the best of care and able to get out and around. I was out on a walk this morning and I sure had a good appetite when we got back in. We had our first bit of snow yesterday. Just a bit of a flurry. It is very lively scenery around here and puts me in mind of home with its wooded valleys and hills.
Media Type
Newspaper
Image
Text
Genealogical Resource
Item Types
Clippings
Articles
Snapshots
Notes
This card is part of a larger collection of World War II personnel clippings. The project began in 1944 at the Lindsay Library. The intent was to gather together as much information as possible on the military record and the service of people from the Town of Lindsay and the County of Victoria (now Kawartha Lakes)who served in the war. To that end, during the years 1944, 1945, and 1946, members of the public donated photographs and updated information about their loved ones. Both library staff and the public saved and donated newspaper clippings. Some of the files contain great amounts of detail, while others have just a name.
Date of Publication
1942
Subject(s)
Capture & imprisonment
Military service
Nazis
Prisoners of war
World War II
Dieppe Raid, 1942
Royal Canadian Engineers
2nd Field Engineers 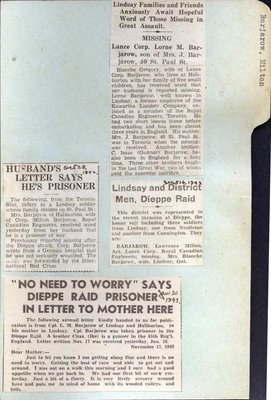