Two more of our local boys returned from overseas on Saturday— Sgt. Ranald [Ronald] Barkwell, who has seen action in Italy, Holland and Ger¬many, and Pte. Jim DeFinney, who fought in Belgium, Holland and Germany. Ronald went over with the 45th and has spent about four and one-half years overseas. Jim went over about one and a half years ago and received wounds in Holland during the past winter. We understand he has volunteered for the war in the Pacific and has been granted a 30 day leave.


July 24, 1945
SGT. R. BARKWELL HOME AFTER FOUR YEARS SERVICE
Kinmount and district was delighted to welcome home a local man who has been absent since 1941 on active service.
Ronald Barkwell, at the call to arms, joined the 45th Battery at Lindsay, in the fall of 1939. From there he went to Petawawa, and to Tracadie, New Brunswick, rising to the rank of gun sergeant.
Going overseas in the fall of 1941, he spend over two years in England. Growing impatient at the inactivity, he left his unit and went to Italy where he joined the 17th Field Regiment in the 5th Armored Division of Montgomery’s 8th Army.
From that time on, Sgt. Barkwell saw much stirring action, seeing the breaking of the Gustaff [Gustav] and Hitler lines and moving with his unit from Ortona as far north as the Brenner Pass.
With his Canadian compatriots he was moved to Belgium in March of this year [1945], immediately getting into close contact with the enemy as his unit moved toward the North Sea to seize the launching sites for the V-2 bombs.
After V-E Day, Sgt. Barkwell had charge of the searching of the returning Germans in his sector. Over 70,000 Germans were searched there before returning to their homeland.
Ronald is now on 30 days leave visiting with his mother, Mrs. Jack Barkwell, of Kinmount, and with his wife, formerly Margaret Hannah, of Haliburton.
Sgt. Barkwell had the misfortune to lose his father while he was in England. His brother Orval is still overseas with the Hastings and Prince Edward Regiment.


November 5, 1945
Galway Township Honours Veterans of World War II
Kinmount, Nov. 5, (PNS) –- Reeve David Curtain and the members of the Galway Municipal Council were hosts to local returned service men on the evening of November 2nd.
Several returned men were present and an evening of dancing was enjoyed, after which a delicious lunch was served.
Reeve Curtain called on Fathers Walsh and Black to speak to the boys and their friends. Both expressed their pleasure at seeing the members of the Services restored to their homes.
Ronald Barkwell, ex-Artillery Sergeant replied on behalf of the community, thanking the Municipality for their generous reception.
This part of the evening ended with God Save the King and dancing continued for some time. Over forty friends from Peterborough had come by chartered bus to attend this reception.
Media Type
Newspaper
Text
Genealogical Resource
Item Types
Clippings
Articles
Notes
This card is part of a larger collection of World War II personnel clippings. The project began in 1944 at the Lindsay Library. The intent was to gather together as much information as possible on the military record and the service of people from the Town of Lindsay and the County of Victoria (now Kawartha Lakes)who served in the war. To that end, during the years 1944, 1945, and 1946, members of the public donated photographs and updated information about their loved ones. Both library staff and the public saved and donated newspaper clippings. Some of the files contain great amounts of detail, while others have just a name.
Date of Original
1945
Subject(s)
17th Field Regiment
45th Battery, RCA
5th Armored Division
Campaigns & battles
Hastings and Prince Edward Regiment
Military life
Montgomery’s 8th Army
Nazis
Soldiers
World War II 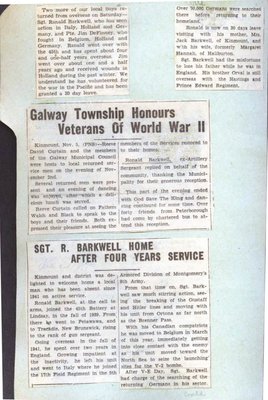