Mrs. Livinia Barnsley of 74 Cambridge St. S., has received official advice from the Director of Records, Dept. of National Defence, Ottawa, to the effect that her son, Pte. Leonard Ross, was officially reported killed on August 5, while serving with the Canadian Forces in France.
Pte. Barnsley was in his 19th year and lived in Lindsay all his life previous to 1943, when following in the footsteps of his father, (a veteran of World War I) he responded to his country’s call and signed up for general service in Canada’s Armed Forces, with the Dufferin, Alderman Rifles Regiment.
He trained at Toronto, Camp Borden and finally at Niagara at which place he completed his training in Canada and went overseas to England, later proceeding to the French Coast.
The Post on behalf of the community extends sincere sympathy to the bereaved family.

Pte. Leonard Barnsley, at the age of 19 years, has paid the supreme sacrifice. Word was received by his mother, Mrs. Lavinia Barnsley, 74 Cambridge St South, Lindsay, that her son was killed in France on Aug. 5th.
The young soldier enlisted in Toronto with the Dufferin and Haldimand Regiment and received his training in Camp Borden, Stratford and Niagara-on-the-Lake. He entered the army on Jan. 19th 1943.
He had been two weeks in France.
Leonard Barnsley was born in Lindsay, a son of the late Charles Barnsley, a veteran of the war, and Mrs. Lavinia Barnsley. He was quite athletic, fond of hockey and other sports.


August 29, 1944
Lindsay Soldier Killed in France
Lindsay, Aug. 29 (Special) - Pte. Leonard Barnsley, 19, has been killed in action, according to word received by. his mother, Mrs. Lavina Barnsley, 74 Cambridge St.
Pte. Barnsley enlisted in Toronto with the Dufferin and Haldimand Regiment, and received his training at Camp Borden, Stratford and Niagara - on -the - Lake. He entered the army June 19, 1943, He was two weeks in France, being killed Aug. 5.
Leonard Barnsley was born in Lindsay, a son of the late Charles Barnsley and Mrs. Barnsley. Mr. Barnsley was a veteran of the first World War.
Media Type
Newspaper
Image
Text
Genealogical Resource
Item Types
Death
Articles
Clippings
Snapshots
Notes
This card is part of a larger collection of World War II personnel clippings. The project began in 1944 at the Lindsay Library. The intent was to gather together as much information as possible on the military record and the service of people from the Town of Lindsay and the County of Victoria (now Kawartha Lakes)who served in the war. To that end, during the years 1944, 1945, and 1946, members of the public donated photographs and updated information about their loved ones. Both library staff and the public saved and donated newspaper clippings. Some of the files contain great amounts of detail, while others have just a name.
Date of Publication
1944
Subject(s)
Campaigns & battles
Death
Soldiers
Veterans
War casualties
World War II
Canadian Armed Forces
Dufferin, Alderman Rifles Regiment
Dufferin and Haldimand Regiment 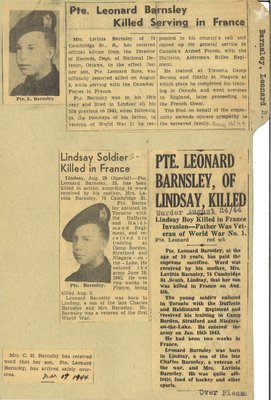