Full Text
No date
Lindsay Airman is Enjoying Life in Alaska
Enjoying a short furlough in Lindsay with his parents, Mr. and Mrs. W. Barnsley, Melbourne St. W, their son, LAC W. C. Barnsley, who has been in army work in Alaska, tells an interesting account of happenings there.
Alaska, he says, is today highly important in commercial and military matters and many places such as Port Greeley, Kodiak and Anchorage will be ‘on the map’ in post-war days.
Warry reports that life in the Army is the very best, with plenty of fresh air, lots of good food, hard work to do and a splendid spirit of comradeship among civilians and soldiers.
Speaking of Alaska, the young airman told in glowing terms of the country and the great prospects for the future.
However, Lindsay looked good to him after an absence of 15 months.

Mr. W. Barnsley, 72 Melbourne St. W. Lindsay, advised The Post today that while reading a book written by Joseph Driscoll, entitled "War Discovers Alaska", he noticed the name of Major General Sidney Buckner Jr., who was recently killed while observing operations on Okinawa.
Mr. Barnsley reports that while he was at an R.C.A.F. group party one night in 1943, he had the honour of shaking hands with Gen. Buckner.
It is interesting to note the following quotation from the book which was made by Gen. Buckner, to Joseph Driscoll, National Correspondent for the New York Herald Tribune, Gen. Buckner said, "I don't believe in passive warfare. There are two ways of dealing with a snake, one is to sit still and wait for it to strike, the other way is to bash the snake's head in and put it out of commission. That is what I favour."
Major Gen. Buckner was 58 years of age when he was killed.
Media Type
Newspaper
Image
Text
Genealogical Resource
Item Types
Clippings
Snapshots
Photographs
Articles
Notes
This card is part of a larger collection of World War II personnel clippings. The project began in 1944 at the Lindsay Library. The intent was to gather together as much information as possible on the military record and the service of people from the Town of Lindsay and the County of Victoria (now Kawartha Lakes)who served in the war. To that end, during the years 1944, 1945, and 1946, members of the public donated photographs and updated information about their loved ones. Both library staff and the public saved and donated newspaper clippings. Some of the files contain great amounts of detail, while others have just a name.
Date of Original
1944-1945
Subject(s)
Soldiers
World War II
Alaska
Royal Canadian Air Force, RCAF, 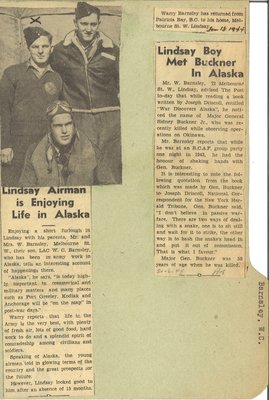