With the R.C.A.F, in India, Jan. 16 — One of the R.A.F. squadrons which took part in the devastating raid on Mandalay Saturday was led by Wing Com. Hugo Beall of Lindsay. In all the attacking squadrons Canada was well represented.
Fires were started all over the target area, said Flt.-Sergt. Bonny Ronnelfitch of Creston, B.C. Ronnelfitch, a tail gunner and another Canadian in the same crew, Flt.-Sergt. Ken Dicks of Fort William, added that there were lots of explosions and the smoke rose several thousand feet.
An all-Canadian crew skippered by Flt-Lieut Art Brown of Grand Forks, B.C., commented on the lightness of the opposition. No enemy fighters attempted to interrupt. Two of the Canadians with Brown were F.O. W. Watters of Fredericton and Sergt. Don Feener of Liverpool, N.S. Among other Canadians in the raid were P.O. W. H. Kay, F.O. P. B. Key, of Calgary, Sergt. Harold Dagg, Clanwilliam, Man.; Sergt. Ernie Harold Sarnia, and Sergt. Norman Hope, Toronto.


No date [February 1945]
HELPED PAVE WAY FOR RAMREE RAID
Flying Liberators with the RAF South-East Air Command in the India-Burma war theatre, Wing-Cmdr. Hugo Beall, RCAF, son of George Beall, of Lindsay, was one of those who helped prepare the way for the recent invasion of Ramree Island, off the Burma coast. The air offensive, aimed at Jap gun positions, is reported as probably the greatest yet launched in the Burma war.
Leading one of the squadrons taking part, Beall watched his men obliterate their target. Not a single enemy aircraft rose to intercept the bombers. Reports say Allied naval vessels were blasting away when the Liberators arrived and, when the order "bombs away" was given, landing barges were moving into shore to land Allied troops.
The young flyer has been in the thick of the fighting since the war started. He received his commission as pilot officer with the RCAF before Canada actually entered the war, and later, as squadron leader with the RAF Bomber Command, took part in heavy raids over German occupied Europe.
Beall is a graduate of Lindsay Collegiate and, while still attending school, commenced his military career by enlisting with the Old Victoria and Haliburton 45th Regiment (Res). He was home on furlough last summer and for a time was an instructor at an air training school in Canada before going to the Far East.


December 20, 1945
Mr. and Mrs. Hugo Beall and Mr. Percy Houzer enjoyed skating in Oakwood Arena Tuesday night. Friends are pleased to see Mr. Beall home after his long war service in the Middle East.
Media Type
Newspaper
Image
Text
Genealogical Resource
Item Types
Clippings
Articles
Snapshots
Notes
This card is part of a larger collection of World War II personnel clippings. The project began in 1944 at the Lindsay Library. The intent was to gather together as much information as possible on the military record and the service of people from the Town of Lindsay and the County of Victoria (now Kawartha Lakes)who served in the war. To that end, during the years 1944, 1945, and 1946, members of the public donated photographs and updated information about their loved ones. Both library staff and the public saved and donated newspaper clippings. Some of the files contain great amounts of detail, while others have just a name.
Publisher
Lindsay Post
Date of Publication
18 Jan 1945
Subject(s)
Campaigns & battles
Military personnel
Military service
Soldiers
World War II
Royal Canadian Air Force, RCAF,
Pacific War
Old Victoria and Haliburton 45th Regiment (Res.)
Liberator Squadron 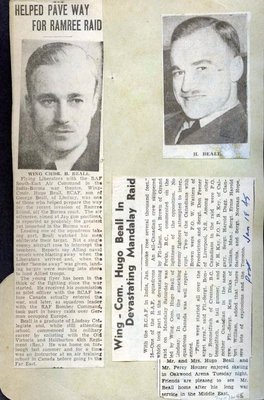