Full Text
No date [Fall 1944]
CPL. WM. BEIGHTON WITH CANUCKS IN TOUGH BATTLE
Flying Potato-Mashers First Indication That Pill-Box Was Occupied
Hail of Lead Surrounds Unit He Is With Pinning Dead And Living Alike In Shell Craters
Cpl. Wm. Beighton, whose wife resides at 71 St. Paul St. Lindsay, has figured in many close calls in battle on the continent, not the least of which is this recent episode coming through from Boyd Lewis, British United Press Correspondent, covering a section of the western front in which Canadians are engaged in some of the bitterest fighting of the war.
Before proceeding with the main story, The Post would like to give a brief resume of Cpl. Beighton’s war career.
In July on the 24th day, he was reported missing in action and not long after this, was reported safe – Sept. 7, he was reported wounded in action and confined to hospital. On all of these occasions this paper carried the story and carried it first.
The fact that he was in action again came as a great surprise to his wife and family here, as she still presumed him to be recovering from his wounds – another indication of the efficiency of the combined British and Canadian medical service at the front.
The story is recounted as follows:

In Old German Atlantic Wall, with Canadians, Oct. 26 (Delayed) — The Germans are buying time with their lives in an effort to delay Allied use of the great port of Antwerp, and today I went to the front where the Nazis are putting up one of the most stubborn stands inside the concrete and steel pillboxes of Fort Frederick Hendrik outside captured Breskens.
(The German DNB Agency today said that Canadian troops had captured Fort Frederick Hendrik).
Twice platoons from a maritime regiment penetrated the moated fort, and then fought they [their] way out with losses after bitter struggles around and even on top of pillboxes, all the while under fire from strongpoints on the perimeter.
Crouching in the thick concrete fortifications built by the Germans to prevent a seaborne landing along the south side of the channel toward Antwerp, I head the story of the weird battle for the fort from the bronzed unshaven lads from an eastern regiment, just out of the line.
An uneasy calm pervaded the scene with only the occasional hiss of an enemy rifle bullet from the fort a few thousand yards along the coast or the spasmodic burst of a shell from a German battery far behind.
TOUGHER THAN CALAIS
The commander of the Maritime unit, Major Maurice Clennett of Halifax, called this fight tougher than Calais and Gris Nez.
Clennett stepped from a dugout to greet men and my guide, Jack Donohue of Vancouver. He suggested we mave [move] to an unexposed place and the faint hiss of a bullet emphasized the warning.
Twice the Canadians entered Fort Frederick Hendrik after the capture of Breskens. The first penetration was on Friday when a patrol entered along a dyke, deceived by its unfortified appearance.
But once in, the men were pinned down in bomb craters for two hours by the vicious fire of enemy 75’s, machine guns and ack-ack from high points on the perimeter. They crawled out at dusk and were obliged to heave their dead behind in shell holes.
Yesterday Clennett tried again with two small detachments, one offering covering fire from the seaward side of the dyke which the other was assigned to smash the pillboxes, one by one. The latter group finally found itself in a crater, atop a sunken pillbox, dodging potato masher grenades.
3-HOUR GRIM GAME
For more than three hours Clennett’s men played a grim game of beanbag with grenades. The crater lay against the concrete wall of an enemy strongpoint, and the Germans lobbed their explosive sticks from a steel-doored passage at the opposite side.
Until the Jerries began hurling potato mashers we didn’t know the pillbox below us was occupied said Corp. William Beighton, of Lindsay, who took part in both forays. Others in the crater were Ptes. . . . [end of record].
Creator
Boyd Lewis
Media Type
Newspaper
Text
Genealogical Resource
Item Types
Articles
Clippings
Notes
This card is part of a larger collection of World War II personnel clippings. The project began in 1944 at the Lindsay Library. The intent was to gather together as much information as possible on the military record and the service of people from the Town of Lindsay and the County of Victoria (now Kawartha Lakes)who served in the war. To that end, during the years 1944, 1945, and 1946, members of the public donated photographs and updated information about their loved ones. Both library staff and the public saved and donated newspaper clippings. Some of the files contain great amounts of detail, while others have just a name.
Publisher
Lindsay Post
Date of Publication
1944
Date Of Event
2 Oct 1944
Subject(s)
Campaigns & battles
Military service
Nazis
Soldiers
War casualties
World War II
Royal Canadian Army
Antwerp (Belgium)
Soldiers -- Wounds and injuries
Battle of the Scheldt
Canadian 1st Army 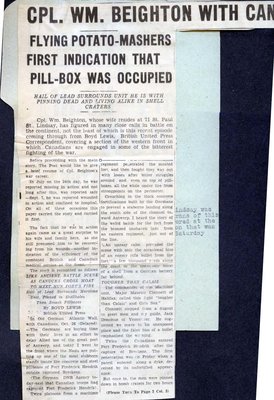