Harold S. Bennett, who has been unfortunate enough to have been wounded twice in the present conflagration overseas, is a son of Mrs. E. Bennett, of Oshawa, his wife being Thelma Thurston, of Lindsay who is at present living at 83 Glenelg St. W. Sergt. Bennett was born in Toronto and received his education in Bowmanville Public school and High School. After leaving school he was employed with the Goodyear Tire and Rubber Company in the moulded goods department. He enlisted in December 2, 1939 at Bowmanville, joining the 1st Midland Regiment in Lindsay. He received his training in Lindsay, Picton and Camp Borden. In July 1941, Sergt. Bennett went overseas with the Stormont, Dundas and Glengarry Highlanders returning to Canada in April 1942 to take up instructional duties with the King's Own Rifles of Canada in Moosejaw, Sask., and Terrace, B.C.
Returning to England in April 1943 with the Irish Regiment of Canada, he became an Instructor until the early part of March when he joined his Regiment in Italy. He had been in action many times, but received bomb concussion in June and had just returned to the lines on October 4th when he was wounded in action on Oct. 9th. The nature of the wounds are not yet known.
Harold is an only son, but has one brother-in-law in the service Pte. Kenneth Thurston of the Royal Canadian Army Medical Corps, serving overseas.
In a recent letter Sergt. Bennett stated he had enjoyed a seven day leave in Rome and visited many ancient buildings and cathedrals, which he described as being very beautiful. In his last letter of Oct. 4th Harold was in good spirits and said he was anxiously awaiting the day when the boys would all return home. This he emphasized and hoped it would be soon.
Sergt. and Mrs. Bennett have one daughter Elaine.

No date
Lindsay Boys Are Mentioned in Despatches

Bennett, Harold Samuel, Sgt., 26 CIC, Elgin St. W., Lindsay
Media Type
Newspaper
Image
Text
Genealogical Resource
Item Types
Articles
Clippings
Snapshots
Description
The Cadet Instructors Cadre (CIC) (French: Cadre des instructeurs de cadets) Branch consists of approximately 7,500 Canadian Forces (CF) officers whose primary duty is the safety, supervision, administration and training of Royal Canadian Sea, Army, and Air Cadets. The Branch is the largest single group within the Canadian Forces reserve force sub-component Cadet Organizations Administration and Training Service (COATS) and is the largest officer branch in the Canadian Forces.
Notes
This card is part of a larger collection of World War II personnel clippings. The project began in 1944 at the Lindsay Library. The intent was to gather together as much information as possible on the military record and the service of people from the Town of Lindsay and the County of Victoria (now Kawartha Lakes)who served in the war. To that end, during the years 1944, 1945, and 1946, members of the public donated photographs and updated information about their loved ones. Both library staff and the public saved and donated newspaper clippings. Some of the files contain great amounts of detail, while others have just a name.
Publisher
Watchful Warder
Date of Publication
Oct 1944
Subject(s)
Military personnel
Soldiers
World War II
Soldiers -- Wounds and injuries
Stormont, Dundas and Glengarry Highlanders
Royal Canadian Army Medical Corps
Cadet Instructors Cadre
Cadet Organizations Administration and Training Service
1st Midland Regiment
King's Own Rifles
Irish Regiment of Canada 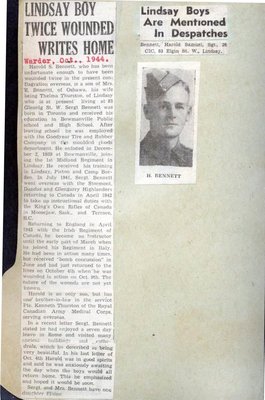