Flt. Sgt. Bruce George Betts, well known Lindsay boy and son of Mr. and Mrs. Arthur Betts, 17 Bond St., is missing following air operations on July 29, according to word received by his parents yesterday.
A graduate of L.C.I. and well known in local sporting circles, particularly in hockey, Bruce has been overseas since June 1943 and had completed his thirty operational flights over enemy territory. He had planned on taking a trip to Scotland on furlough after completing a few more trips for good measure before switching off unto instructional duty for a time.
Flt. Sgt. Betts received his wings at St. John's Quebec and was attached to the Alouette Squadron overseas. He is 24 years of age.
In addition to Flt. Sgt. Bruce, three other members of the Betts family are serving in the armed forces, they are: Pilot Officer Wallace Betts, two years overseas, Donald, in training in Chatham N.B. with the R.C.A.F. and John Stanley, with the Canadian Army Ordnance Division at Camp Utopia, N.B.
Media Type
Newspaper
Text
Genealogical Resource
Item Types
Clippings
Articles
Notes
This card is part of a larger collection of World War II personnel clippings. The project began in 1944 at the Lindsay Library. The intent was to gather together as much information as possible on the military record and the service of people from the Town of Lindsay and the County of Victoria (now Kawartha Lakes)who served in the war. To that end, during the years 1944, 1945, and 1946, members of the public donated photographs and updated information about their loved ones. Both library staff and the public saved and donated newspaper clippings. Some of the files contain great amounts of detail, while others have just a name.
Publisher
Watchful Warder
Date of Original
1943-1944
Subject(s)
Military service
Missing in action
Soldiers
Royal Canadian Ordnance Corps
Alouette Squadron 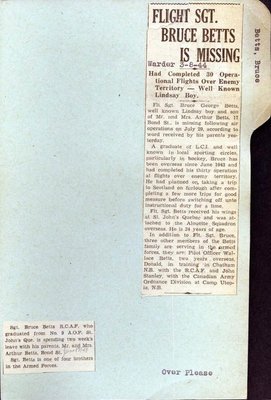