Full Text
August 1, 1944
FOUR SONS ARE IN THE ARMED SERVICES. ONE IS MISSING.
Sgt. Bruce Betts, son of Mr. and Mrs. Arthur Betts, Town, is Air Casualty, In Over 30 Operational Trips.
The following telegram was received this morning by Mr. and Mrs. A. Betts, Bond St., concerning their son Bruce.


Ottawa, Aug. 1st.
Regret to advise you that your son Sgt. Bruce George Betts is reported missing after air-operations on July 29. Letter follows.
Bruce who is 24 years of age went overseas a year ago in June and when last heard from on July 1st had made over 30 operational trips and said after a few more he was due for a ground leave. Before enlisting he had been engaged with the International Nickel Co. in Sudbury. He received his education in town and was a member of Cambridge St. United Church.
Three brothers are also in His Majesty's service. P.O. Wallace Betts, overseas for two years in November. Donald Betts in an air Training School at Chatham, N.B. and John Stanley in the Ordnance Corps at Camp Utopia near St. John N.B.
Another brother, Stuart is engaged with Crain Printers Ltd. Hamilton and a sister Ethel is in the C.N.R. ticket office in Toronto.
The "Post" joins with the many friends of the family in extending sympathy at this anxious time and hope that better news may be forthcoming soon.
Media Type
Newspaper
Text
Genealogical Resource
Item Types
Clippings
Articles
Notes
This card is part of a larger collection of World War II personnel clippings. The project began in 1944 at the Lindsay Library. The intent was to gather together as much information as possible on the military record and the service of people from the Town of Lindsay and the County of Victoria (now Kawartha Lakes)who served in the war. To that end, during the years 1944, 1945, and 1946, members of the public donated photographs and updated information about their loved ones. Both library staff and the public saved and donated newspaper clippings. Some of the files contain great amounts of detail, while others have just a name.
Publisher
Lindsay Post
Date of Publication
1 Aug 1944
Date Of Event
29 Jul 1944
Subject(s)
Alouette Squadron
International Nickel Co.
Missing in action
Royal Canadian Air Force, RCAF,
Royal Canadian Ordnance Corps
Soldiers
World War II 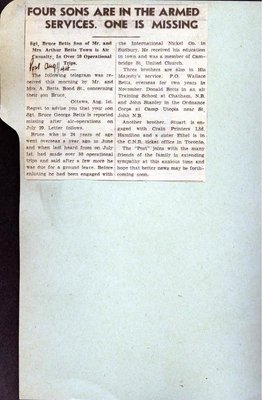