I have just received a shipment from Italy, would you like to see it? asked Mr. Bigham of Bigham's Electrical Shop, Wm. St. N., with a knowing twinkle in his eye as he looked anxiously at your gullible reporter and ambled off toward his place of business.
A shipment from Italy, did you say? You can bet your bottom dollar I would, was the reply as he hurriedly pulled his hat down over his ears and set off in hot pursuit of his visitor.
I was just joking in one sense of the word, said Mr. Bigham, at his place of business, but nevertheless I have a few things here sent to Mrs. Bigham and myself from our son, Sgmn. Lloyd Bigham, now stationed in Italy, that might be interesting to you.
The first thing and the thing that is really outstanding is this, he said, spreading a breath-taking silk lace table-cloth over a nearby table and pointing to it with pride.
He also sent this, indicating a pure linen table runner beautifully embroidered with graceful swans and figured work, and this — holding out two cushion covers, one stencilled [stenciled] with a typically American little girl, holding a pretty flower and the other with a figure of an American boy hanging on to his toy spade; the colors in each case being exquisite.
Other souvenirs included a solid brass ash-tray, along with a perfume bottle and a Pekinese dog made from a turquoise shade of glass.
Lloyd Bigham has been overseas some time past and is attached to the R.C.H.A. in Italy as a radio mechanic.
A quotation from a recent letter received from their son, gives a vivid word picture of life with the army in Italy. Quote: It is 7.30 p.m. and the three of us, i.e., the driver, my helper and I, are comfortably situated in our private house, which is also my shop. We have spring beds, electric lights, running water (when it rains), and a stove (for brewing up). There are cinemas and it's pretty nice all around. As soon as I get time, we’ll have our own radio. I just [illegible] that to my buddies, and they [illegible] would mention the clock [illegible] to the 'homey’ effect and Frisco (one of the boys) said, If it wasn't for me running the generator, there wouldn't be any electric lights.
Media Type
Newspaper
Text
Genealogical Resource
Item Types
Clippings
Articles
Notes
This card is part of a larger collection of World War II personnel clippings. The project began in 1944 at the Lindsay Library. The intent was to gather together as much information as possible on the military record and the service of people from the Town of Lindsay and the County of Victoria (now Kawartha Lakes)who served in the war. To that end, during the years 1944, 1945, and 1946, members of the public donated photographs and updated information about their loved ones. Both library staff and the public saved and donated newspaper clippings. Some of the files contain great amounts of detail, while others have just a name.
Date of Publication
1944
Subject(s)
Linen
Radio operators
Royal Canadian Horse Artillery
Soldiers
World War II 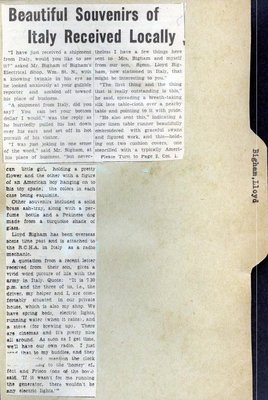