"Received the carton of 300 cigarettes which you sent me today, and I want to thank you all.
"Since January I have been receiving regularly copies of the Amalgamated News, which I enjoy very much.
"The June issue was of special interest to me with air the photographs in No. 1 Department. It may interest you to know that here in England, I have seen a surprisingly large amount of Amalgamated Products, both in the air Force and at various Army camps I have visited. They always remind me of the good old days and of pleasant associations.
"Since ‘D-Day’ I have been looking forward to a visit in France, but so far no luck. If someone doesn't wise up pretty soon, it looks like I shall remain in England for the duration.
Thanking you once again for the cigarettes and papers and wishing the Recreation Club and all the employees of the Amalgamated the best there is."

L. Bigham.
Media Type
Newspaper
Text
Genealogical Resource
Item Types
Clippings
Articles
Correspondence
Notes
This card is part of a larger collection of World War II personnel clippings. The project began in 1944 at the Lindsay Library. The intent was to gather together as much information as possible on the military record and the service of people from the Town of Lindsay and the County of Victoria (now Kawartha Lakes)who served in the war. To that end, during the years 1944, 1945, and 1946, members of the public donated photographs and updated information about their loved ones. Both library staff and the public saved and donated newspaper clippings. Some of the files contain great amounts of detail, while others have just a name.
Publisher
Amalgamated News
Date of Publication
15 Jan 1945
Subject(s)
Correspondence
Soldiers
World War II
Royal Canadian Air Force, RCAF, 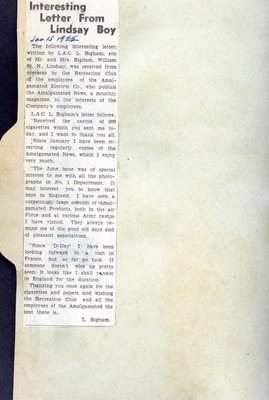