Full Text
No date [1944]
A letter recently received states that Tpr. Melville Black son of Mrs. Evelyn Thomas has been transferred from England to Italy.

Mrs. Evelyn Thomas, Islay, has been advised that her son Trooper Melville J. Black, has been accidentally killed while fighting on the Italian Front.
Tpr. Black was 20 years of age. His birth place was Glenarm and he had lived in Fenelon Twp. most of his life previous to joining the service.
Tpr. Black was a member of a Tank Corps and had been overseas six months prior to his death while on active service.
The deceased was a kind and cheerful young man and was ready to help anyone at any time.
Surviving the departed soldier are his sorrowing Mother, and four brothers, Bert, Ronnie, Earl and Lavern also three sisters Luella, Jean and Buelah.
The sympathy of the community [his life previous to joing [joining] the service] is with these sorrowing relatives.

Word has been received by Mrs. Samuel Thomas, Islay, that her eldest son, Melville Black, has been killed in action in Italy. Only two weeks previous, this gallant young soldier was recommended for decoration for gallantry in service.
Twenty years of age, Melville Black enlisted in Kingston with the Ordnance Corps and went overseas lage, noted as a sculptress, doing slightly over one year ago. [sic]


No date [June 1944]
Friends at Islay, Ont., have received word that Trooper Melville J. Black has been killed in action on the Italian front. Trooper Black who was only 20 years of age, lived most of his life in the Township of Fenelon. He was a member of the Tank Corps and had been six months overseas.
Media Type
Newspaper
Text
Genealogical Resource
Item Types
Death
Articles
Clippings
Description
Trooper Melville J. Black of Islay, Ontario, paid the supreme sacrifice in World War II.
Listed on the Honour Roll of Victoria and Haliburton Counties.
Notes
This card is part of a larger collection of World War II personnel clippings. The project began in 1944 at the Lindsay Library. The intent was to gather together as much information as possible on the military record and the service of people from the Town of Lindsay and the County of Victoria (now Kawartha Lakes)who served in the war. To that end, during the years 1944, 1945, and 1946, members of the public donated photographs and updated information about their loved ones. Both library staff and the public saved and donated newspaper clippings. Some of the files contain great amounts of detail, while others have just a name.
Date of Publication
22 Jun 1944
Subject(s)
Death
Military service
Royal Canadian Ordnance Corps
Royal Tank Regiment
Soldiers
War casualties
World War 1939-1945 Honour Roll
World War II 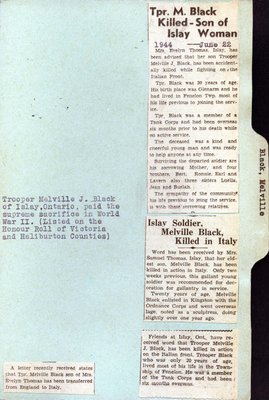