Reported in a rumor dead on Aug. 13th, Gunner Cleve Bonisteel, of the Canadian Army Overseas, wired from the grave to his mother, Mrs. J. Bonisteel, 25 Glenelg St. W., this week as follows:

Mrs. Bonisteel said today: I was prety [pretty] sick when I heard the rumor and when many people called me. I wrote the Government to check on the report and apparently they did, for Cleve wired me the above cablegram.
Gnr. Cleve Bonisteel who was born and raised in Lindsay, attended both the public school and the Collegiate Institute here. Following school he was employed with Fee Motors and W. Langdon, and afterwards with Giles, Rice and Peters, automobile firm in Toronto. He enlisted at the outset of war with the 45th Battery in Lindsay and trained at Petawawa. He went overseas with the Battery over three years ago and has been in England and somewhere in France ever since. He has been in the thick of many a battle, but he never tells me a word about it said Mrs. Bonisteel.
Media Type
Newspaper
Text
Genealogical Resource
Item Types
Articles
Clippings
Description
Cleveland Bonisteel of Lindsay, whose mother lives at 25 Glenelg Street W. enlisted in the Canadian Army on 11 September 1939. He entered the 45th Battery R.C.A. and trained at Lindsay and Petawawa. He was sent overseas with this unit on 25 November 1941. He had preliminary training in England prior to serving with the army in France, Belgium, Holland and Germany.
Bonisteel transferred from the 45th to the 2nd Heavy H.A.A. Cleve arrived home in August 1945 and was given his discharge from the service on 28 September 1945. He was then employed at Leaside, Ontario, with the Canadian National Railways.
Notes
This card is part of a larger collection of World War II personnel clippings. The project began in 1944 at the Lindsay Library. The intent was to gather together as much information as possible on the military record and the service of people from the Town of Lindsay and the County of Victoria (now Kawartha Lakes) who served in the war. To that end, during the years 1944, 1945, and 1946, members of the public donated photographs and updated information about their loved ones. Both library staff and the public saved and donated newspaper clippings. Some of the files contain great amounts of detail, while others have just a name.
Publisher
Watchful Warder
Date of Publication
18 Oct 1944
Subject(s)
Military life
Soldiers
World War II
Royal Canadian Artillery
45th Battery, RCA
2nd Heavy Anti-Aircraft Regiment 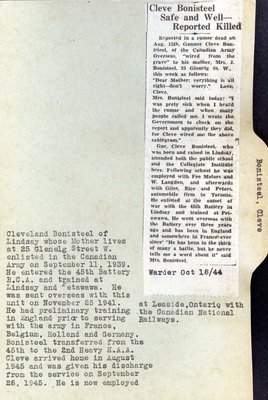