A happy reunion took place at 37 Sussex St. N. when Pte. Charles H. Booth, 19 years old, arrived home from overseas. In the gathering were his parents, Mr. and Mrs. H. E. Booth and also his brother Sgt. Raymond Booth RCAF who had arrived only a short time previous from his station.
It is a grand feeling to have both my boys home said Mrs. Booth and especially to know that Charlie is not seriously wounded. I knew he was coming home on a hospital ship but did not know for what reason and today I am so happy that it seems like a dream. My only hope is that all mothers will shortly have the same happiness.
Pte. Charles Booth, who came from England on the Canadian hospital ship, Lady Nelson, joined the Canadian Armoured Corps at Peterboro in Nov. 1942. He trained at Cornwall and Camp Borden, going overseas in May 1943. In England he was transferred to the Canadian Infantry Reserve Unit. Due to ill health he was confined to the hospital several times, but did not know he was slated for Canada until four days before his ship sailed.
While in England he experienced many bombing raids especially in London. I like England and like the people there he stated. It was nice being able to pick flowers at Christmas time and I brought Mother some pansies that I picked only a month ago.
His brother Raymond recently graduated from the Bomber and Gunnery School at Mt. Pleasant PEI and is enjoying a furlough before being transferred to another . . . [end of record]
Media Type
Newspaper
Text
Genealogical Resource
Item Types
Articles
Clippings
Notes
This card is part of a larger collection of World War II personnel clippings. The project began in 1944 at the Lindsay Library. The intent was to gather together as much information as possible on the military record and the service of people from the Town of Lindsay and the County of Victoria (now Kawartha Lakes) who served in the war. To that end, during the years 1944, 1945, and 1946, members of the public donated photographs and updated information about their loved ones. Both library staff and the public saved and donated newspaper clippings. Some of the files contain great amounts of detail, while others have just a name.
Date of Publication
19 Apr 1944
Subject(s)
Hospital ships
Military discharges
Military hospitals
Recruiting & enlistment
Soldiers
World War II
Royal Canadian Air Force, RCAF,
Soldiers -- Wounds and injuries
Royal Canadian Armoured Corps
Canadian Infantry Reserve Unit
HMS Lady Nelson 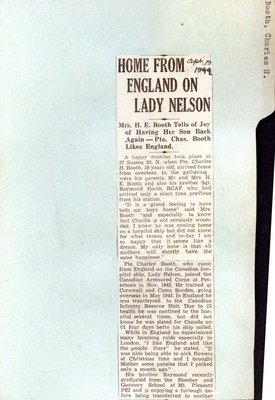