Full Text
June 6, 1945
Lindsay Man Feared Lost off Halifax
Sgt. R.L. Bouch is among a group of four men comprising the crew of an RCAF training plane feared lost off the east coast of Canada. The crew set off in the aircraft from their base at Pennfield Ridge, N.S., Saturday night on a routine training flight and have been missing since early Sunday morning.
They were last reported about 25 miles east of Halifax at 1.30 a.m., Sunday.


No date [June 1945]
Mrs. Robert Leonard Bouch, Division St., town, has been advised that her husband is reported as missing. Sgt. Bouch was on a training flight off the east coast of Canada when he was last heard from.
Media Type
Newspaper
Image
Text
Genealogical Resource
Item Types
Clippings
Articles
Snapshots
Notes
This card is part of a larger collection of World War II personnel clippings. The project began in 1944 at the Lindsay Library. The intent was to gather together as much information as possible on the military record and the service of people from the Town of Lindsay and the County of Victoria (now Kawartha Lakes)who served in the war. To that end, during the years 1944, 1945, and 1946, members of the public donated photographs and updated information about their loved ones. Both library staff and the public saved and donated newspaper clippings. Some of the files contain great amounts of detail, while others have just a name.
Publisher
Lindsay Post
Place of Publication
Lindsay
Date of Publication
6 Jun 1945
Subject(s)
Air Observer School
Aircraft accidents
Military air pilots
Military training
Missing in action
Royal Canadian Air Force
Soldiers
War casualties
World War II 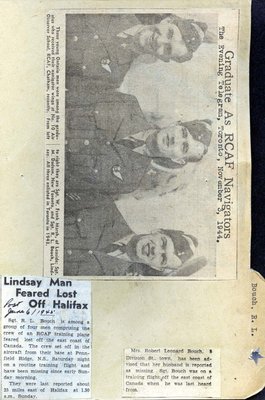