Janetville, June 22 —- The following letter from Cecil Bradburn, son of, Mr. and Mrs. R. G. Bradburn, of Janetville, was written from Germany, Cecil being a prisoner of war.
May 9 1943.
Dear Mother Dad and Harold:
A few lines to let you know I am well. Have had no mail for sometime now. Hope you received my last card of April 26. We didn't get any cards to send last week. The last letter from you was posted Jan. 4. I got it April 13. There has not been much mail this last two weeks. Received a letter from Lloyd and Beth April 13 and another Apr. 20. Also one from Aunt Allie April 15 also had one from Aunt Sarah Mar. 9; it was sent Nov. 30, Well how are you getting along? I hope you are all well. Had a clothing parcel from Canada House in London about a week ago. It was mostly winter clothing. There was a pound and a half of chocolate. It was a good parcel but I would have liked summer stuff better for now. They are allowed to send one parcel. At present I cannot think of anything I need. I suppose you will have some summer things in my second parcel. It is quite warm now. We sit out in the sun most of the day playing cards and reading. You might include some cards in next parcel if you can. Well there is not much news this time, so will close. Hoping this finds you all well.
Remember me to all my friends.

Janetville, Aug, 26, (P.N.S.) — Mr. and Mrs. R. G. Bradburn whose son Sgt. Cecil M. Bradburn has been a prisoner in Germany for some months were very pleased recently to receive the following communication from the Director of Airmen Personal service.

Dear Mrs. Bradburn — It is a pleasure to advise you that your son Sgt. C. M. Bradburn has been appointed Temporary Flight Sgt. (paid) effective 8th June 1942 and Temporary Warrant Officer Class 2 (paid) effective December 8, 1942.
Notice of these appointments is also being forwarded to your son.

Sincerely
C.C.P. Graham.
Media Type
Newspaper
Text
Genealogical Resource
Item Types
Articles
Clippings
Correspondence
Notes
This card is part of a larger collection of World War II personnel clippings. The project began in 1944 at the Lindsay Library. The intent was to gather together as much information as possible on the military record and the service of people from the Town of Lindsay and the County of Victoria (now Kawartha Lakes) who served in the war. To that end, during the years 1944, 1945, and 1946, members of the public donated photographs and updated information about their loved ones. Both library staff and the public saved and donated newspaper clippings. Some of the files contain great amounts of detail, while others have just a name.
Date of Publication
22 Jun 1943
Subject(s)
Capture & imprisonment
Correspondence
Nazis
Prisoners of war
Soldiers
World War II 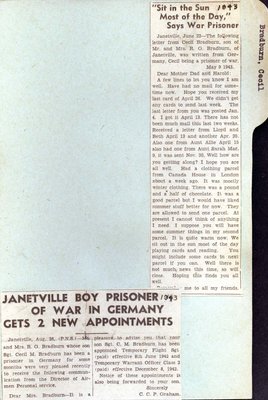