Media Type
Text
Genealogical Resource
Item Type
Clippings
Description
William G. Brasier whose home is at 33 Simcoe Street, Lindsay, enlisted for service in the Canadian Army on August 1, 1940.
He was moved from Lindsay to Ottawa in January 1941, to St. John, N.B. in May 1941; to Niagara-on-the-lake, Ont. in October 1941, to Edmonton, Alta. in March 1942, to Prince Rupert, B.C. in June 1942; to Victoria, B.C. in May 1944, and the United Kingdom in January 1945.
Enlisting with the rank of Private W.G. Brasier was promoted to L/Cpl on January 28, 1941; from L/Cpl to Cpl on May 15, 1941.
Cpl Brasier went overseas on January 8, 1945. He served with the army in England. He arrived home on December 13, 1945 and was given his discharge from the service on January 14, 1946.
Cpl. Brasier was employed by Allen & Hambury as a Driver before his war-service. He is welcome back to his home town.
Notes
This card is part of a larger collection of World War II personnel clippings. The project began in 1944 at the Lindsay Library. The intent was to gather together as much information as possible on the military record and the service of people from the Town of Lindsay and the County of Victoria (now Kawartha Lakes) who served in the war. To that end, during the years 1944, 1945, and 1946, members of the public donated photographs and updated information about their loved ones. Both library staff and the public saved and donated newspaper clippings. Some of the files contain great amounts of detail, while others have just a name.
Date of Publication
1944
Subject(s)
Military service
Military training
Recruiting & enlistment
Soldiers
World War II
Royal Canadian Army 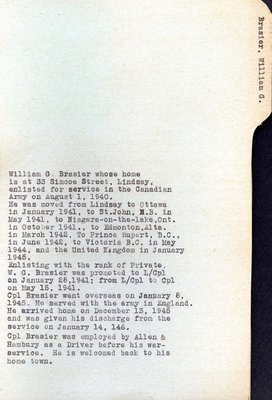