Full Text
No Date [1944]
LINDSAY BOY ESCAPED NAZIS, BUT IS MUM ON HIS EXPERIENCES

Above are the pictures of two of the members of a Wellington bomber, shot down over enemy territory several months ago. Flying Officer Harold J. Brennan, of Lindsay and Flying Officer Alfred Horton [Houston] of Toronto were reunited when they stepped off trains at the Union Station in Toronto. Five of the six members of the crew have turned up in England safely after being missing for several months.
Flying Officer Brennan, who is a son of Mr. and Mrs. A. J. Brennan, Glenelg St. East, has been home for a week or two, but being of a quiet, modest, retiring disposition he has remained mum. It's swell to be back home again, where people are able to enjoy well-lighted streets and where everyone appears to have plenty to eat was the young officer's only comment.
P.O. Brennan had a tiny bandage on the back of one hand. Is that the only mark you have? he was asked. Yes, and I had to return to Canada to get that little scratch he added.
The young airman's many friends are delighted to have the opportunity of renewing acquaintances. They figure it out that he will have a wonderful story to tell after the war is over.

"We are pleased to advise that your son, Flying Officer Harold James Brennan, previously reported missing, has arrived safely in the United Kingdom, July 13th. A letter will follow." These are the words in a telegram, received by Mr. and Mrs. A. J. Brennan, 17 Glenelg St. E., this morning from the Headquarters' staff of the R.C.A.F.
Harold Brennan, a pilot in the R.C.A.F., was reported missing after a big air operation over Germany on April 21st, 1944, in which it was believed he was shot down somewhere over France. It is now presumed that P.O. Brennan was taken by the French underground and kept in hiding until he could be returned safely to allied hands. It is presumed by parents and friends that he never was a prisoner of war.
Harold has on older brother Flight-Lieutenant Ted Brennan instructing, with the R.C.A.F.
Media Type
Newspaper
Image
Text
Genealogical Resource
Item Types
Photographs
Articles
Snapshots
Clippings
Notes
This card is part of a larger collection of World War II personnel clippings. The project began in 1944 at the Lindsay Library. The intent was to gather together as much information as possible on the military record and the service of people from the Town of Lindsay and the County of Victoria (now Kawartha Lakes) who served in the war. To that end, during the years 1944, 1945, and 1946, members of the public donated photographs and updated information about their loved ones. Both library staff and the public saved and donated newspaper clippings. Some of the files contain great amounts of detail, while others have just a name.
Publisher
Lindsay Post
Date of Publication
Oct 1944
Subject(s)
Aircraft accidents
Capture & imprisonment
Military air pilots
Military life
Missing in action
Nazis
Prisoners of war
Reunions
Soldiers
Soldiers' homes
World War II
Rescue
Royal Canadian Air Force, RCAF,
Soldiers -- Wounds and injuries 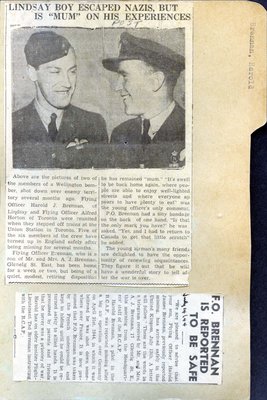