We are pleased to advise that your son, Flying Officer Harold James Brennan, previously reported missing, has arrived safely in the United Kingdom, July 13th. A letter will follow. These are the words in a telegram, received by Mr. and Mrs. A. J. Brennan, 17 Glenelg St. E., this morning from the Headquarters' staff of the R.C.A.F.
Harold Brennan, a pilot in the R.C.A.F., was reported missing after a big air operation over Germany on April 21st, 1944, in which it was believed he was shot down somewhere over France. It is now presumed that P.O. Brennan was taken by the French underground and kept in hiding until he could be returned safely to allied hands. It is presumed by parents and friends that he never was a prisoner of war.
Harold has on older brother Flight-Lieutenant Ted Brennan instructing, with the R.C.A.F.

CREW MEMBERS of a Wellington bomber shot down over enemy territory, F.O. Harold Brennan, Lindsay, and F.O. Alfred Houston, Abbott Ave., were reunited this morning at Union station. Five of the six members of their crew had turned up in England safely after being missing for several weeks.
It was a glad home-coming and many friends have since enjoyed renewing acquaintances with the gallant young flier.
A letter received from headquarters by Mr. and Mrs. Brennan reads as follows:
"Harold Brennan, a pilot in the R.C.A.F., was reported missing after a big air operation over Germany on April 21st, 1944, in which it was believed he was shot down somewhere over France."
Monday morning P.O. Brennan, accompanied by P.O. Alfred Houston of Toronto, who was navigator on the same crew as Harold Brennan, met friends in Toronto and continued on to Lindsay.
P.O. Brennan has nothing but the kindest words to say of the people of France, who looked after him, and for the people of England. He says very little regarding his experiences.


No date [July-August 1944]
P.O. BRENNAN, FIRST MISSING, NOW BACK HOME
Young Lindsay Flier Has Nothing to Say Regarding His Many Thrilling Experiences - Speaks Highly of Kindness of People of England.

"It's swell to be back home again where people are able to enjoy well-lighted streets and where everyone appears to have plenty to eat," said Pilot Officer Harold J. Brennan, son of Mr. and Mrs. A. J. Brennan of Glenelg St. who has arrived safely in Canada after having been reported missing in flight operations over enemy territory several weeks ago. Pilot Officer Brennan, along with five out of six of the bomber crew were able to make their escape from occupied enemy territory, after having been forced to abandon their crippled plane.
Media Type
Newspaper
Text
Genealogical Resource
Item Types
Clippings
Articles
Notes
This card is part of a larger collection of World War II personnel clippings. The project began in 1944 at the Lindsay Library. The intent was to gather together as much information as possible on the military record and the service of people from the Town of Lindsay and the County of Victoria (now Kawartha Lakes) who served in the war. To that end, during the years 1944, 1945, and 1946, members of the public donated photographs and updated information about their loved ones. Both library staff and the public saved and donated newspaper clippings. Some of the files contain great amounts of detail, while others have just a name.
Date of Publication
14 Jul 1944
Subject(s)
Aircraft accidents
Military air pilots
Military life
Missing in action
Nazis
Prisoners
Royal Canadian Air Force, RCAF,
Soldiers
World War II 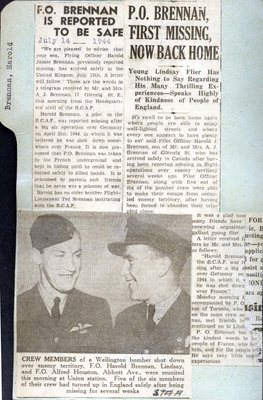