Full Text
February 20, 1943
Congratulations to Harold James Brennan, son of Mr. and Mrs. A. J. Brennan, Glenelg St. W., of Lindsay, who graduated as a pilot office at No. 2 Service Flying Training School at Uplands near Ottawa on Friday.


April 24, 1944
REPORTED MISSING!
Flying Officer Harold Brennan Believed To Have Had Part in Greatest Air Raid Over Europe
Mr. and Mrs. A. J. Brennan of 17 Glenelg St. E. have received word this morning that their son Flying Officer Harold J. Brennan is reported missing after operations on April 21. It is believed that he took part in that raid over Europe in which the strongest force of R.C.A.F. and R.A.F. bombers ever mobilized dropped more than 5,400 tons of explosives, topping by far the weight of any other air attack in history.
Harold Brennan is a pilot of the R.C.A.F.

News was received here this morning by Mr. and Mrs. A. J. Brennan that their son, Flying Officer Harold Brennan is reported missing following operations on April 21st.
It is understood that Flying Officer Harold J. Brennan took part in the operations over Europe in which the strongest R.C.A.F. and R.A.F. bombers ever mobilized, in which over 5,400 tons of explosives, topping by far the weight of any other air attack in history.
Another older brother, Ted Brennan, is also serving with the R.C.A.F. in Canada.

"We are pleased to advise that your son, Flying Officer Harold James Brennan, previously reported missing, has arrived safely in the United Kingdom, July 13th. A letter will follow." These are the words in a telegram received by Mr. and Mrs. A. J. Brennan, 17 Glenelg St. E. last week from the Headquarters' staff of the R.C.A.F.
Harold Brennan, a pilot in the R.C.A.F. was reported missing after a big air operation over Germany on April 21st, 1944, in which it was believed he was shot down somewhere over France. It is now presumed that F.O. Brennan was taken by the French underground and kept in hiding until he could be returned safely to allied hands. It is presumed by parents and friends that he never was a prisoner of war. Harold has an older brother Flight-Lieutenant Ted Brennan instructing with the R.C.A.F.
Media Type
Newspaper
Text
Genealogical Resource
Item Types
Articles
Clippings
Notes
This card is part of a larger collection of World War II personnel clippings. The project began in 1944 at the Lindsay Library. The intent was to gather together as much information as possible on the military record and the service of people from the Town of Lindsay and the County of Victoria (now Kawartha Lakes) who served in the war. To that end, during the years 1944, 1945, and 1946, members of the public donated photographs and updated information about their loved ones. Both library staff and the public saved and donated newspaper clippings. Some of the files contain great amounts of detail, while others have just a name.
Subject(s)
Aircraft accidents
Bombings
Campaigns & battles
Capture & imprisonment
Military air pilots
Military life
Missing in action
Prisoners of war
Royal Air Force
Royal Canadian Air Force, RCAF,
Soldiers
World War II 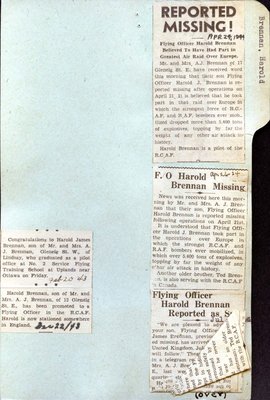