Arrived in Toronto on Monday morning from New York, where he had arrived after trans-Atlantic trip by steamer. He spent a few hours with the navigator of the plane he was piloting on the night it was shot up over Germany, and with whom he made the trip back from England.
About the happiest two people in Lindsay today are Mr. and Mrs. A. J. Brennan, 17 Glenelg St. E., who after many anxious months have their son, Flying Officer Harold J. Brennan at home with them for a month’s furlough. They met him as he stepped of the C.N.R. Toronto train here last night.
When FO. Harold Brennan stepped off the C.N.R. train here last night, he ended a journey of several thousand miles which started when he joined the R.C.A.F. in Canada, back in January 1942, and in the course of which he had many thrilling experiences.
Graduating from an R.C.A.F. training school as a pilot officer in February 1943, he went overseas in May of the same year.
On the night of April 20-21, he was thought to have set out with his craft on what at that time was believed to have been the heaviest bombing raid over Europe since the war had started and on April 24, the Post carried the following announcement of the fact that he had been reported missing:

Mr. and Mrs. A.J. Brennan of 17 Glenelg St. E. have received word this morning that their son, Flying Officer Harold J. Brennan is reported missing after operations on April 21.

From this time on long anxious weeks dragged by for his family and friends back here in Canada.
Then on July 14, the following announcement appeared in the Post stating that he had made his way back to England and was well:

We are pleased to advise you that your son, Flying Officer Harold James Brennan, previously reported missing, has arrived safely in the United Kingdom, July 13th. A letter will follow.
These are the words in a telegram received by Mr. and Mrs. A.J. Brennan, 17 Glenelg St. E., this morning from the headquarters’ staff of the R.C.A.F.

Harold Brennan, a pilot in the R.C.A.F., was reported missing after a big air operation over Germany on April 21st, 1944, in which it was believed he was shot down somewhere over France.

Monday morning, FO. Brennan, in company of FO. Alfred Houston of Toronto, the flyer who had been his navigator in the plane he was piloting the night he was shot down and who made the journey home with him, also to spend a furlough, spent a few hours in Toronto before catching the night train for Lindsay, where and friends [sic].
Speaking with Mr. Brennan this morning it was learned by the Post that Harold would be home for a month and on the termination of his leave he would report to headquarters at Ottawa.
Mr. Brennan stated that Harold had made the trip from England by boat and had docked at New York, later travelling by train to Toronto and thence on home.
Commenting on his son’s first reaction to being back home Mr. Brennan said that almost the first thing Harold said when he hopped off the train was, It’s swell to be back home where people are still able to enjoy well-lighted streets at night and where everyone has lots to eat.
When asked if his son would comment on his experience while . . . [end of record].
Media Type
Newspaper
Text
Genealogical Resource
Item Types
Articles
Clippings
Notes
This card is part of a larger collection of World War II personnel clippings. The project began in 1944 at the Lindsay Library. The intent was to gather together as much information as possible on the military record and the service of people from the Town of Lindsay and the County of Victoria (now Kawartha Lakes) who served in the war. To that end, during the years 1944, 1945, and 1946, members of the public donated photographs and updated information about their loved ones. Both library staff and the public saved and donated newspaper clippings. Some of the files contain great amounts of detail, while others have just a name.
Publisher
Lindsay Post
Date of Publication
27 Aug 1944
Subject(s)
Aircraft accidents
Bombings
Campaigns & battles
Military air pilots
Military life
Missing in action
Soldiers
World War II
Royal Canadian Air Force, RCAF,
Furloughs 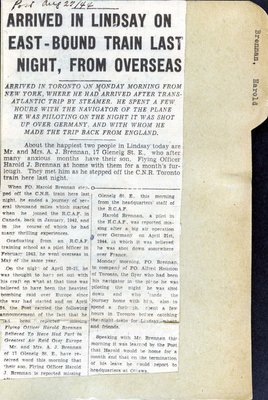