Media Type
Image
Text
Genealogical Resource
Item Types
Clippings
Snapshots
Photographs
Description
Edward Richard Brennan, son of Mr. and Mrs. A. J. Brennan, 17 Glenelg Street E., Lindsay, enlisted in the Royal Canadian Air Force in October 1940.
He had the rank of AC2 and received his training at schools of navigation and piloting. He was at Swift Current, Sask., Prince Albert, Sask., Regina, Sask., Penfield Ridge, Summerside, P.E.I., and Hagersville, Ont.
Edward R. Brennan was promoted in turn to LAC. Sgt.; given his Commission in the Air Force and promoted from Pilot Officer to Flying Officer and finally to Flight-Lieutenant.
Flt./Lt. Brennan was not sent overseas in the course of his service. He was a Navigational Instructor with special training in Single and Multi-engines and served in this position in Canada only.
Fl/Lt Brennan was given his discharge from the Air Force in January 1945.

Prior to enlistment, E. R. Brennan was employed as a Bank Clerk at the Dominion Bank.
Since his retirement from active service, E. R. Brennan is employed in Toronto and is making his home at 773 Eglinton Ave. E. His wife is the former Ruth Perrin of Oakwood, Ontario.
Notes
This card is part of a larger collection of World War II personnel clippings. The project began in 1944 at the Lindsay Library. The intent was to gather together as much information as possible on the military record and the service of people from the Town of Lindsay and the County of Victoria (now Kawartha Lakes) who served in the war. To that end, during the years 1944, 1945, and 1946, members of the public donated photographs and updated information about their loved ones. Both library staff and the public saved and donated newspaper clippings. Some of the files contain great amounts of detail, while others have just a name.
Date of Publication
May 1943
Subject(s)
Military service
Recruiting & enlistment
Soldiers
World War II
Promotions, Military
Royal Canadian Air Force, RCAF, 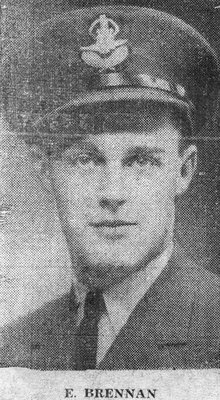