Full Text
No Date [December 1945]
FORMER ARMY M.O. TO OPEN PRACTICE HERE
Captain T. W. L. Broadfoot of Fergus and Hamilton, has recently returned from overseas and will practice in the office at the home of Mrs. F. Logan, 237 Kent Street West.
Capt. Broadfoot graduated in medicine from the University of Toronto in 1940. Following graduation he spend a year’ interneship [internship] at St. Joseph’s Hospital, Hamilton and in July, 1941 took an appointment as senior interne in surgery at the Hamilton General Hospital. After four months here, he joined the Canadian Army and two months later was posted for duty overseas.
He spent 21 months in England as a Regimental Medical Officer and then proceeded to Italy with the Perth Regiment, later transferring to a Field Ambulance. On Nov. 1, 1944 he transferred to the 3rd Canadian Armoured Recce Regiment (Governor General’s Horse Guards) with which unit he left Italy for France, Belgium, Holland and Germany. He remained with this Regiment until his repatriation began in July 1945.
During his period of overseas service Dr. Broadfoot took a course in Tropical Diseases.
Dr. Broadfoot opened his office on December 1.
Media Type
Newspaper
Image
Text
Genealogical Resource
Item Types
Articles
Clippings
Snapshots
Notes
This card is part of a larger collection of World War II personnel clippings. The project began in 1944 at the Lindsay Library. The intent was to gather together as much information as possible on the military record and the service of people from the Town of Lindsay and the County of Victoria (now Kawartha Lakes) who served in the war. To that end, during the years 1944, 1945, and 1946, members of the public donated photographs and updated information about their loved ones. Both library staff and the public saved and donated newspaper clippings. Some of the files contain great amounts of detail, while others have just a name.
Date of Original
19451201
Subject(s)
Military discharges
Military hospitals
Recruiting & enlistment
Soldiers
World War II
Regimental Medical Officer
Perth Regiment, RCA
3rd Canadian Armoured Recce Regiment, RCA
Governor General’s Horse Guards
Field Ambulance, RCA 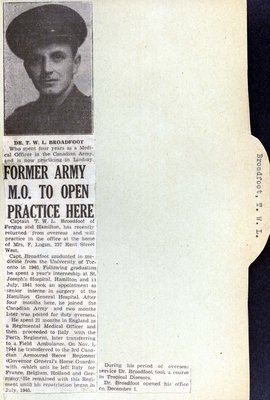