Full Text
March 26, 1944
Burnt River Boy Visitor To London
Views Part of City from St. Paul’s Cathedral
Burnt River, March 26 (PNS) — Mrs. Dave Steele, of Burnt River, has received a very interesting letter from her son, Pte. Clifford A. Brooks, R.C.A.M.C., overseas, who tells of a sightseeing trip that he, with some friends, had to London, sponsored by the Canadian War Services.
His one great thrill was seeing through St. Paul's Cathedral, which was hit by a bomb that didn't explode. He said it was marvellous [marvelous]. He pointed out such famous men as the Duke of Wellington, Sir Christopher Wren and Lord Nelson, who were buried there.
He said the coach that bore Wellington's body to the grave weighed 18 ton, took 18 days to build and was drawn by 12 horses. It was made from French guns captured at the battle of Waterloo.
He relates having climbed to the top of the cathedral stairs to view the blasted parts of the city which we hear so much about. Before returning from the tour, they had luncheon at the much talked of Beaver Club.
Cliff, upon returning to his port, was much enthused about this very educational trip.
Media Type
Newspaper
Text
Item Types
Clippings
Articles
Notes
This card is part of a larger collection of World War II personnel clippings. The project began in 1944 at the Lindsay Library. The intent was to gather together as much information as possible on the military record and the service of people from the Town of Lindsay and the County of Victoria (now Kawartha Lakes) who served in the war. To that end, during the years 1944, 1945, and 1946, members of the public donated photographs and updated information about their loved ones. Both library staff and the public saved and donated newspaper clippings. Some of the files contain great amounts of detail, while others have just a name.
Publisher
Lindsay Post
Date of Publication
26 Apr 1944
Subject(s)
Canadian War Services
London, England.
Royal Canadian Army Medical Corps
Soldiers
St. Paul's Cathedral (London, England)
Tourism
World War II 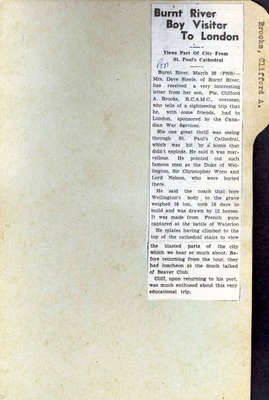