Mr. and Mrs. Norman Brown, 33 St. Peter St., have received word from Ottawa to the effect that their son, Pte. Albert James Brown has been wounded while on active service overseas.
Pte. Brown entered the Armed Forces in May of 1942 and was sent overseas in September of the same year and took part in the D-Day invasion.
According to the telegram that Mrs. Brown received, the nature of her son's wounds are not yet available, but it is reported that he is in the hospital overseas and is progressing very favorably.

It is signed—Director of Records.
Media Type
Newspaper
Image
Text
Genealogical Resource
Item Types
Articles
Clippings
Snapshots
Notes
This card is part of a larger collection of World War II personnel clippings. The project began in 1944 at the Lindsay Library. The intent was to gather together as much information as possible on the military record and the service of people from the Town of Lindsay and the County of Victoria (now Kawartha Lakes) who served in the war. To that end, during the years 1944, 1945, and 1946, members of the public donated photographs and updated information about their loved ones. Both library staff and the public saved and donated newspaper clippings. Some of the files contain great amounts of detail, while others have just a name.
Date of Publication
5 Apr 1945
Subject(s)
Correspondence
D-Day
Military hospitals
Military service
Military training
Recruiting & enlistment
Royal Canadian Army
Soldiers
Soldiers -- Wounds and injuries
Stormont, Dundas and Glengarry Highlanders
World War II 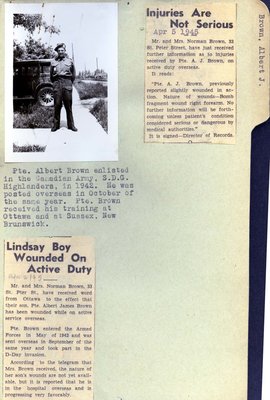