No date [February 1944]
Graduating as a sergeant was D. F. Brown, 25 Victoria Avenue, Lindsay, from No. 3 Bombing and Gunnery School, MacDonald, Man., as Air Gunner.


March 1, 1944
Sgt. D. F. Brown of the R.C.A.F, stationed at Three Rivers, Que. for the past month spent the weekend at his home in town and left Monday night for Lachine, Que.


No date [Spring 1944]
At St. Paul's Anglican Church in Toronto by the Rev. Mr. Cook, Emily Barr daughter of Mrs. Dearman and the late Mr. Charles Alfred Dearman of London England to Sgt. De Willett Francis Brown of the R.C.A.F. son of Mr. and Mrs. Gordon Brown of Lindsay.


November 11, 1944
Sgt. DeWillet Brown is Reported Missing
Lindsay, Nov. 11 – Word has been received by Mrs. Francis Brown, of Lindsay, that her husband, Sgt. De Willet Brown, of the R.C.A.F., is missing after operations over enemy territory. Sgt. Brown’s last flight is reported to have taken place on November 1st.
Receiving his wings at MacDonald, Manitoba, in January of this year, Sgt. Brown went overseas early in April. He has 16 operational flights to his credit, Mrs. Brown reports.

Word has been received by Mr. and Mrs. Gordon Brown, 25 Victoria Ave. N., town, to the effect that their son, De Willet Francis Brown, has been reported missing after air operations over enemy territory on November 1st.
The information was also received by his wife, Mrs. D. F. Brown, 40 Elgin Street.
Further details are not yet available, but will be forthcoming as soon as they are received by the department.
Media Type
Newspaper
Text
Genealogical Resource
Item Types
Clippings
Snapshots
Articles
Description
Flt Sgt. D. F. Brown presumed dead – June 13, 1945.
Notes
This card is part of a larger collection of World War II personnel clippings. The project began in 1944 at the Lindsay Library. The intent was to gather together as much information as possible on the military record and the service of people from the Town of Lindsay and the County of Victoria (now Kawartha Lakes) who served in the war. To that end, during the years 1944, 1945, and 1946, members of the public donated photographs and updated information about their loved ones. Both library staff and the public saved and donated newspaper clippings. Some of the files contain great amounts of detail, while others have just a name.
Date of Original
1943-1945
Date Of Event
1 Nov 1944
Subject(s)
Military air pilots
Military service
Military training
Missing in action
Soldiers
World War II
Royal Canadian Air Force, RCAF, 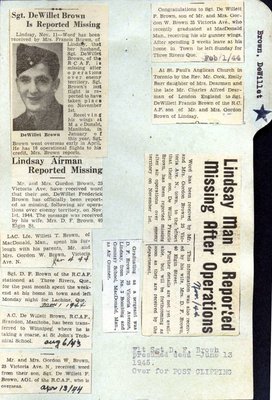