Mr. and Mrs. Walter Brien of Dunsford have just recently been advised of the promotion to the rank of Capt. of Harry E. Brown, a native of Ilford, Essex, England and who had resided with them at Dunsford for 10 years prior to his enlistment in 1939.
Captain Brown enlisted with the 45th Field Battery R.C.A. as a gunner and was among the first to sign up following the declaration of war on Germany.
Arriving overseas in November 1941 he was promoted to sergeant and served for a time in England, later going to North Africa and from there to Italy where he is still serving and where the promotion was granted. He is attached to an artillery unit.
A brother, Robert Brown, is serving with the Royal Navy and was aboard the vessel which carried King George VI to Malta during his tour of that area.
His parents still reside at Ilford where his father is employed as a probation officer.
Media Type
Newspaper
Image
Text
Genealogical Resource
Item Types
Clippings
Articles
Snapshots
Description
E. Brown of Oshawa was among the many veterans of this district who registered at the Reception and Reunion held for them in Lindsay on Saturday 19 January 1946.
Notes
This card is part of a larger collection of World War II personnel clippings. The project began in 1944 at the Lindsay Library. The intent was to gather together as much information as possible on the military record and the service of people from the Town of Lindsay and the County of Victoria (now Kawartha Lakes) who served in the war. To that end, during the years 1944, 1945, and 1946, members of the public donated photographs and updated information about their loved ones. Both library staff and the public saved and donated newspaper clippings. Some of the files contain great amounts of detail, while others have just a name.
Publisher
Lindsay Post
Date of Publication
14 Feb 1945
Subject(s)
Artillery (Troops)
Soldiers
World War II
Royal Canadian Army
Royal Navy
King George VI
Promotions, Military
45th Battery, RCA 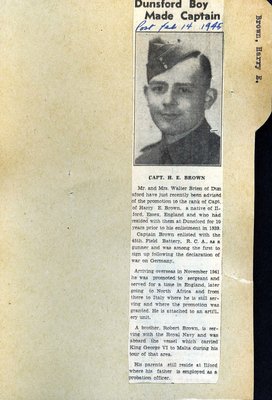