Full Text
October 17, 1945
FINE RECORD WITH 45TH
When the history of the Victoria and Haliburton Regiment is properly chronicled by military historians and authorities, ranking among the most prominent Commanding Officers will be the name of Lt.-Col. H. H. Brown of Lindsay.
Now that the 45th Battery is expected back as a unit, to be tendered a civic welcome, it is interesting to note that Lt. Col. Brown, who incidentally holds his Lieut.-Colonelcy in both the artillery and infantry, is now back in civilian life, having had a long, faithful and active service during the years of the war.
It was the 2nd day of September 1939 that Lt.-Col. Brown, as O.C. of the 45th received the order to mobilize. In May 1940 orders were received to take the unit to Petawawa and it was shortly after the arrival in Petawawa that the Commandant one of the finest to arrive at the training camp.
When the Department decided to open up Training Centres in various parts of the Dominion in February, Lt.-Col. Brown was despatched [dispatched] to Peterboro to take charge of the Centre. Later on he was again sent to Petawawa Camp, being one of the first five original officers to take charge of the new Advanced Training Centre. The 45th Battery was one of the first chosen to train officers and N.C.O.’s at Petawawa. One of this officer’s gun crews was able to go into crash action in 45 seconds to 75 seconds, setting a camp record in the demonstration which was witnessed by many high-ranking officials. The demonstration was, to use the words of one of the officials, astounding, and later on the crew was chosen to make a tour of several centres in Ontario.
It is of interest to note that on several different occasions Lt-Col. Brown endeavored to get into the active overseas service but according to official information his request was refused because of the fine work he was accomplishing at Petawawa.
The unit commanded by Lt.-Col. Brown was foremost in other activities particularly in sport and according to an officer of Camp this unit was successful in winning in the neighborhood of 90 per cent of the events on athletic field days.
Col. Brown has had a long active military career. In World War No. 1 he went overseas with the 109th Bn. and received merited promotions. He reverted in rank in order to go to France and later on was given his Commission on the field of battle. Lindsay and district citizens who have admired the 45th for many years, will join in the civic welcome to be tendered to the boys on their return and in paying tribute to Lt.-Col. Brown.
Media Type
Newspaper
Image
Text
Genealogical Resource
Item Types
Articles
Clippings
Snapshots
Notes
This card is part of a larger collection of World War II personnel clippings. The project began in 1944 at the Lindsay Library. The intent was to gather together as much information as possible on the military record and the service of people from the Town of Lindsay and the County of Victoria (now Kawartha Lakes) who served in the war. To that end, during the years 1944, 1945, and 1946, members of the public donated photographs and updated information about their loved ones. Both library staff and the public saved and donated newspaper clippings. Some of the files contain great amounts of detail, while others have just a name.
Date of Publication
17 Oct 1945
Subject(s)
Artillery (Troops)
Campaigns & battles
Military training
Soldiers
Veterans
World War I
World War II
Promotions, Military
45th Battery, RCA 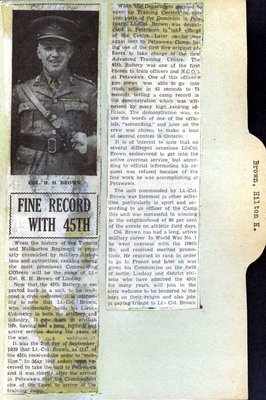