Ottawa, Sept. 19: The Department of National Defence announced today 68 new gallantry awards to personnel of the Canadian Army who served in the North-West European theatre. Citations covering the actions accompanied the announcement of the awards.
The list included a Bar to the D.S.O. to a Brigadier; the Distinguished Service Order (D.S.O.) to 10 Lieutenant-Colonels and 10 Majors; the Military Cross (M.C.) to 10 Officers and Warrant Officers; the Distinguished Conduct Medal (D.C.M.) to a Warrant Officer and Military Medal (M.M.) to 36 Warrant Offices, N.C.O.’s and Other Ranks.
Among those receiving the award of the Military Medal was Staff Sgt. L. T. Brown, of Lindsay.
His biography and citation follows:

Staff Sgt. Leslie Talmadge Brown, of the Royal Canadian Artillery, was born at Ryerson, Ont., on May 5, 1902. In civilian life he was a mechanic and was living at Lindsay, Ont., when he enlisted in Sept. 1939. He was promoted to the rank of Sgt. in October of that year. He went overseas in Nov. 1941. His wife lives at 7 Colborne St., Lindsay, Ont.
His citation reads: Staff Sergeant Brown as Regimental Artificer of 7 Canadian Medium Regiment has always done outstanding work in keeping the guns of the regiment in action. During the period from February 1, 1945 to April 30, 1945 the guns were subjected to observed enemy gun fire on several occasions but through the efforts of Staff Sergeant Brown the guns were repaired and kept in action. On one occasion the Regiment was supporting 4 Canadian armoured division in the attack on Veen. The gun area was under heavy, observed, enemy artillery fire by day and constant enemy bombing and straffing by night. This non-commissioned officer showed great coolness, perseverance and fortitude in repairing and maintaining guns that had been knocked out. To a great extent it was by his effort that the guns were kept in action, thus materially assisting in the successful outcome of the operation. Again during the preparation for the Rhine crossing when the regiment was in action near Wissel, a gun was damaged by observed fire from a 105 mm. Staff Sergeant Brown cooly carried on and repaired the fun in spite of the continuing and accurate enemy shelling. Throughout the whole period from Normandy this non-commissioned officer has shown untiring devotion to duty and coolness under fire and by his technical ability and perseverance he has kept guns in action which otherwise would have been evacuated and lost to the regiment.
Media Type
Newspaper
Text
Genealogical Resource
Item Types
Clippings
Articles
Rewards of merit
Notes
This card is part of a larger collection of World War II personnel clippings. The project began in 1944 at the Lindsay Library. The intent was to gather together as much information as possible on the military record and the service of people from the Town of Lindsay and the County of Victoria (now Kawartha Lakes) who served in the war. To that end, during the years 1944, 1945, and 1946, members of the public donated photographs and updated information about their loved ones. Both library staff and the public saved and donated newspaper clippings. Some of the files contain great amounts of detail, while others have just a name.
Date of Publication
19 Sep 1945
Subject(s)
Arms & armament
Campaigns & battles
Military personnel
Military service
Rewards of merit
Soldiers
World War II
Royal Canadian Army
Military Weapons
Normandy (France), Attack on, 1944
Promotions, Military
Military Medal
7 Canadian Medium Regiment 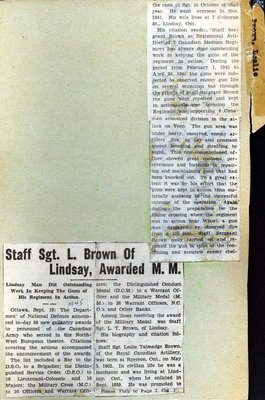