At the Palm Sunday Morning service in Queen Street Church, Rev. H.C. Wolfraim conducted a Memorial Service for Pte. Woodrow Brown who was killed in action in Germany on March 9th 1945.
Woodrow enlisted in September 1943 and after training at three military centres went overseas in October 1944. He was in Holland by November 10th 1944 serving with the 5th Algonquin Regt. He paid the Supreme Sacrifice on March 9th 1945 somewhere in Germany.
The Minister after reading extracts from three letters which he had received from Woodrow since last Christmas, paid tribute to the genial, kind and enthusiastic spirit of this brave soldier who lived daringly, dangerously and sacrificially. The subject of the sermon was Facing Life’s Central Test.
Woodrow transferred his Church membership to Queen Street Church in April 1941 from St. John’s Church in South Verulam after he and his foster-mother, Mrs. Ransom, came to live with Mr. and Mrs. George Murphy (the latter being Mrs. Ranson’s daughter). He was active in the Queen’s Own Young People’s Bible Class and Young People’s Union.
Up to the present, 10 young men of Queen Street Church have died on Active Service and 17 have been wounded.
Media Type
Newspaper
Image
Text
Genealogical Resource
Item Types
Death
Articles
Clippings
Snapshots
Notes
This card is part of a larger collection of World War II personnel clippings. The project began in 1944 at the Lindsay Library. The intent was to gather together as much information as possible on the military record and the service of people from the Town of Lindsay and the County of Victoria (now Kawartha Lakes) who served in the war. To that end, during the years 1944, 1945, and 1946, members of the public donated photographs and updated information about their loved ones. Both library staff and the public saved and donated newspaper clippings. Some of the files contain great amounts of detail, while others have just a name.
Date of Publication
28 Mar 1945
Subject(s)
Algonquin Regiment
Campaigns & battles
Death
Foster Children
Monuments & memorials
Queen Street United Church (Kawartha Lakes, Ont.)
Royal Canadian Army
Royal Canadian Infantry Corps
Soldiers
War casualties
World War 1939-1945 Honour Roll
World War II 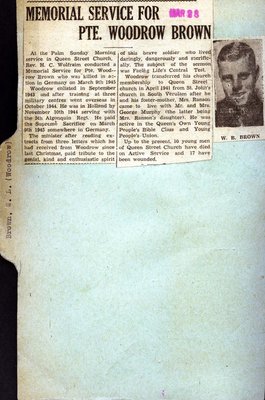