Fenelon Falls, Jan. 6 (PNS) – Following nine days’ leave at his home, Flt.-Sgt. Herbert Burley, son of Mr. and Mrs. Geo. Burley, left Fenelon Falls last day of the old year to assume duties as an instructor in the R.C.A.F. at N.B.
Herb was rather serious at the weekend. Home leaving is not home coming for the gallant men of the armed forces of Canada. He expressed desire that he would have the opportunity to fly over western as well as eastern Canada. He was an arrival of the ship, Queen Elizabeth, just before Christmas.


June 26, 1945
Writes Boy’s Mother Own Sentiments
The following letter to Mrs. Geo. Burley of Fenelon Falls, speaks for itself and its sentiments will be echoed by who knew the late W.O. Herbert Burley.

Lachine, P.Q.
Dear Mrs. Burley: -
Today, when Montreal was going crazy with delight at the news of the official end of the war, somehow or other I could not enter into the spirit of things.
The picture of the four other men with whom I joined my first squadron kept flashing through my mind: Pete Burley, Bud Hambly, Brad Bradshaw, and Harold Bumstead, four of the grandest chaps one could ever hope to meet.
These men, and all the others who like them, made the supreme sacrifice are the ones to whom the world is indebted.
May your sorrow be tempered by the pride you have a right to feel in this hour of victory.
My deed sympathy goes out to you tonight.
Sincerely,
N.M. Paton
Media Type
Newspaper
Text
Genealogical Resource
Item Types
Death
Correspondence
Articles
Clippings
Description
Warrant Officer G. Herbert Burley of Fenelon Falls, Ont. paid the supreme sacrifice in World War II.
From the Honour Roll for Victoria and Haliburton Counties of those who have given their lives in the cause of freedom.
Notes
This card is part of a larger collection of World War II personnel clippings. The project began in 1944 at the Lindsay Library. The intent was to gather together as much information as possible on the military record and the service of people from the Town of Lindsay and the County of Victoria (now Kawartha Lakes) who served in the war. To that end, during the years 1944, 1945, and 1946, members of the public donated photographs and updated information about their loved ones. Both library staff and the public saved and donated newspaper clippings. Some of the files contain great amounts of detail, while others have just a name.
Date of Publication
26 Jun 1945
Date Of Event
12 Jun 1943
Subject(s)
Correspondence
Death
Royal Canadian Air Force
Soldiers
VE Day
War casualties
World War 1939-1945 Honour Roll
World War II 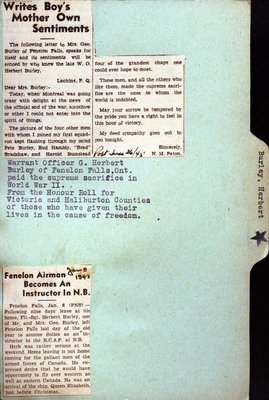