A very impressive Service was held in Cambridge St. United Church on Sunday Morning, June 27. The Honour Roll of Miss Ethel Flavelle's class was presented to the Congregation. It was unveiled by John Snale and Frank Weldon both former members of the Class.
In a short address Mr. Frank Weldon paid high tribute to Miss Flaville. While the large Congregation stood Eric Ferguson the present president of the Class read the Names of about 100 young men. Rev. J. J. Black read the names of these who have died in the Service for King and Country.
Harry Beatty, David Christie, Arthur Fletcher, Jim McLean, Howard Sleep, Allister Wright. This was followed by an interval of Silence —Prayer by the minister and National Anthem.

An interesting and impressive service was held in Cambridge St. United Church Sunday night, when an honor roll of some seventy-five names was dedicated and placed in the memorial entrance.
The roll, containing the names of men from the church, now on active service in Canada or in other lands, has been hand-engraved on parchment, and nicely framed.
A large number of people gathered for the service which was in charge of Rev. J. J. Black, assisted by Rev. F. H. McIntosh, while the address was delivered by Mr. C. G. Frost. The honor roll, as read by Rev. Mr. Black, was as follows:

A simple sincere memorial service formed a part of the communion service held in Cambridge St. United Church, Sunday morning.
A magnificent array of flowers and palms across the front of the altar were placed by the families of the boys who have given their lives in the service of their country, namely FO. James McLean, killed April 1st, 1942, Buried ot [at] Riverside; FO. Arthur Fletcher, killed March 29th, 1943, Buried in England and Sgt-Obs. Howard Sleep, killed March 29th, 1943 and buried in Germany.
The pastor, Rev. J. J. Black, also referred to the recent passing of FO. Bruce Frederick and to the sad news of Flt-Sgt. Jack Owens being reported as missing overseas. Prayers were offered by the pastor and a memorial hymn was sung.
Media Type
Newspaper
Text
Genealogical Resource
Item Types
Clippings
Articles
Notes
This card is part of a larger collection of World War II personnel clippings. The project began in 1944 at the Lindsay Library. The intent was to gather together as much information as possible on the military record and the service of people from the Town of Lindsay and the County of Victoria (now Kawartha Lakes) who served in the war. To that end, during the years 1944, 1945, and 1946, members of the public donated photographs and updated information about their loved ones. Both library staff and the public saved and donated newspaper clippings. Some of the files contain great amounts of detail, while others have just a name.
Date of Publication
29 Jun 1943
Subject(s)
Cambridge Street United Church (Kawartha Lakes)
Death
Military personnel
Soldiers
Veterans
War casualties
War memorials
World War 1939-1945 Honour Roll
World War II 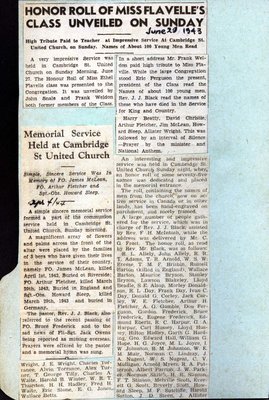