Full Text
August 3, 1944
Burnt River Boy is Seriously Wounded in Action in Normandy
Pte. W.A. Cameron is Normandy Casualty. Brother on same Front.
Seriously wounded in action in France was the word received recently by Mr. and Mrs. Ed Cameron of Burnt River concerning their son Pte W. A. Cameron of the Dundas, Stormont and Glengarry Highlanders.
Pte. Cameron has been in the army for about four years having enlisted in 1940 and going overseas in July 1941. He is 23 years old. He received his education in the Public and Continuation schools of Coboconk.
Two brothers are also in the armed services; Gnr. R. E. Cameron also on the invasion front and R. J. Cameron in training in Canada with the R.C.N.V.R.

Mr. and Mrs. Ed Cameron of Burnt River have just received further word from their son, Pte. W.A. Cameron, (Bill) who was recently wounded while serving in active service overseas.
He writes he was serving with the Stormont, Dundas and Glengarry Highlanders in France and that fragments from an exploding shell injured his eyesight to the extent of causing temporary blindness but that he is now able to see quite well again and is on the road to recovery.
Another brother, Rod, is also serving and is reported in good health.
Media Type
Newspaper
Text
Genealogical Resource
Item Types
Articles
Clippings
Notes
This card is part of a larger collection of World War II personnel clippings. The project began in 1944 at the Lindsay Library. The intent was to gather together as much information as possible on the military record and the service of people from the Town of Lindsay and the County of Victoria (now Kawartha Lakes) who served in the war. To that end, during the years 1944, 1945, and 1946, members of the public donated photographs and updated information about their loved ones. Both library staff and the public saved and donated newspaper clippings. Some of the files contain great amounts of detail, while others have just a name.
Publisher
Lindsay Post
Date of Publication
Aug 1944
Subject(s)
Soldiers
World War II
Royal Canadian Army
Soldiers -- Wounds and injuries
Stormont, Dundas and Glengarry Highlanders
Royal Canadian Navy Volunteer Reserve (RCNVR) 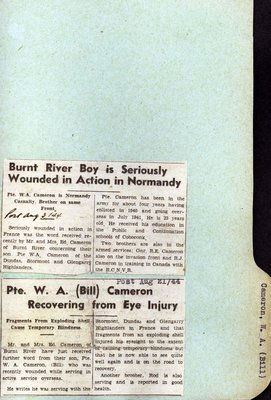