Media Type
Image
Text
Genealogical Resource
Item Types
Photographs
Snapshots
Clippings
Description
R188031
Charles S. Carew whose home address was 57 Wellington Street, Lindsay, and whose pre-war occupation was machine tool designer, enlisted in the Canadian Air Force on August 14, 1942 with the rank of Aircraftman 2. He trained at Manning Depot 31, #5 I.T.S. Belleville, at 9 E.F.F.S. St. Catherines. He was attached to the #1 A.O.S. Malton, Lachine, Que. and Three Rivers, Que. He received his Navigator’s Wings January 14, 1944. He was promoted to L.A.C., Sergeant,, Flight-Sergeant, and Warrant Officer.
He was sent overseas on March 24, 1944 and did operational duty over European theatres of war.
He transferred from Wigtown, Scotland to Kinlon, Scotland, and to Yorkshire, England.
W.O. Carew was attached to No. 426 Thunderbird Squadron, No. 6 Bomber Command. He arrived home on June 23, 1945 and was discharged on September 5, 1945.
Notes
This card is part of a larger collection of World War II personnel clippings. The project began in 1944 at the Lindsay Library. The intent was to gather together as much information as possible on the military record and the service of people from the Town of Lindsay and the County of Victoria (now Kawartha Lakes) who served in the war. To that end, during the years 1944, 1945, and 1946, members of the public donated photographs and updated information about their loved ones. Both library staff and the public saved and donated newspaper clippings. Some of the files contain great amounts of detail, while others have just a name.
Date of Publication
14 Aug 1942
Subject(s)
Military air pilots
Military discharges
Military education
Military service
Military training
Recruiting & enlistment
Soldiers
World War II
Promotions, Military
Royal Canadian Air Force
No. 426 Thunderbird Squadron
No. 6 Bomber Command 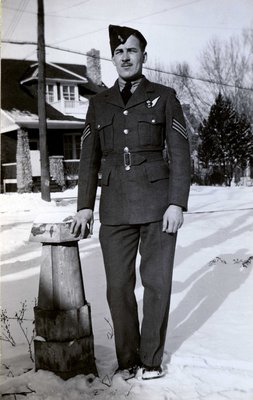