Mrs. J. J. Chalmers has just received word of the death of her husband, Gnr. J. J. Chalmers.
Gunner Chalmers was wounded and died in France, Aug. 8th, is the official word Mrs. Chalmers received.
He was born at Burnt River, where he received his education.
Gunner Chalmers enlisted in Lindsay four days after war was declared, training in Lindsay and Petawawa, until three years ago when he went overseas.
Rev. C. D. Cross received word from the Padre who officiated at his funeral in France.
A Memorial Service will be held in Lindsay at the Apostolic Church Sunday afternoon at 3PM., Sept. 3rd.
Mrs. Chalmers is the daughter of Rev. R. A. Dawson, pastor of the Apostolic Church, Lindsay.


August 30, 1944
Lindsay Girl’s Husband Paid Supreme Sacrifice
Official news reached Mr. and Mrs. J. Chalmers of Fenelon Falls, of the death of their son on the battlefields of France, Gnr. J.J. Chalmers. Death took place on Aug. 8th.
Gunner Chalmers was one of the first in this district to enlist, four days after war had been declared. He trained with the 45th Battery in Lindsay and at Petawawa before leaving for England over three years ago. He took part in the D Day invasion. He has another brother in the 7th Canadian Army in France and has two brothers-in-law in the service.
Gnr. Chalmers also leaves to mourn his young wife who was formerly Isabel Dawson, daughter of Rev. R. A. and Mrs. Dawson, of the Apostolic Church, Lindsay.


No date [August 1944]
Killed in Action
Word came to Mr. and Mrs. William Chalmers that their son Jim had been killed in action. Jimmy Chalmers was one of the first to enlist around here. He was in the Signal Corps and it is almost five years since he enlisted. He has been overseas for nearly 4 years. A genial favourite with all who knew him and the sincere sympathy of the entire community is extended to the bereaved parents and family. Another brother Lloyd is overseas in France.


September 11, 1944
Lindsay, Sept. 11 (Special) - Many causalities have been reported in the Lindsay district in recent communications received by relatives.
Mr. and Mrs. J. Chalmers of Fenelon Falls have received official confirmation of the death of their son, Gunner J. J. Chalmers in France. Gunner Chalmers enlisted in September 1939, with the 45th Field Battery at Lindsay and trained at Lindsay and Petawawa before going overseas. He is survived by his parents and his wife, the former Isabel Dawson, daughter of Rev. R. A. and Mrs. Dawson of the Apostolic Church in Lindsay.
Media Type
Newspaper
Image
Text
Genealogical Resource
Item Types
Death
Snapshots
Articles
Clippings
Notes
This card is part of a larger collection of World War II personnel clippings. The project began in 1944 at the Lindsay Library. The intent was to gather together as much information as possible on the military record and the service of people from the Town of Lindsay and the County of Victoria (now Kawartha Lakes) who served in the war. To that end, during the years 1944, 1945, and 1946, members of the public donated photographs and updated information about their loved ones. Both library staff and the public saved and donated newspaper clippings. Some of the files contain great amounts of detail, while others have just a name.
Publisher
Watchful Warder
Date of Publication
30 Aug 1944
Subject(s)
45th Battery, RCA
Death
Royal Canadian Army
Royal Canadian Artillery
Soldiers
War casualties
World War 1939-1945 Honour Roll
World War II 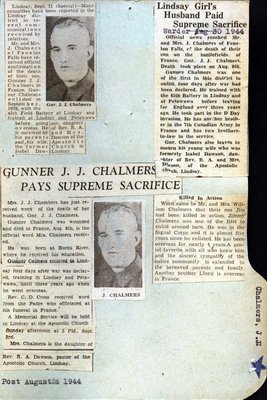