Mrs. G. W. Chambers has received from her husband, Sgt. Gordon William Chambers, R.C.A., Overseas, a certificate presented to him for his service with the 21st Army Group and signed by B. L. Montgomery, Field Marshall, Commander-in-Chief 21st Army Group.
Sgt. Chambers is a brother-in-law of Mr. Clifford Bellamy. His wife, Mrs. G. W. Chambers, assists Mr. Ballamy at the “Bellamy Lunch” on Lindsay St. S.
Sgt. Chambers, born in Lindsay, is the son of Mr. John Chambers, of 39 St. Paul St., Lindsay, and the late Mrs. Chambers.
He was a former member of the 56th Reserve of Lindsay, going active from Lindsay in the spring of 1943.
Before enlisting he was employed by the Smith Transport here.
Sgt. Chambers also sent several snapshots at the time he sent along the certificate which show he is in good condition physically.
Media Type
Newspaper
Text
Genealogical Resource
Item Types
Articles
Clippings
Notes
This card is part of a larger collection of World War II personnel clippings. The project began in 1944 at the Lindsay Library. The intent was to gather together as much information as possible on the military record and the service of people from the Town of Lindsay and the County of Victoria (now Kawartha Lakes) who served in the war. To that end, during the years 1944, 1945, and 1946, members of the public donated photographs and updated information about their loved ones. Both library staff and the public saved and donated newspaper clippings. Some of the files contain great amounts of detail, while others have just a name.
Publisher
Lindsay Post
Date of Publication
3 Feb 1945
Subject(s)
21st Army Group
56th Reserve (Lindsay)
Military Medal
Royal Canadian Army
Soldiers
World War II 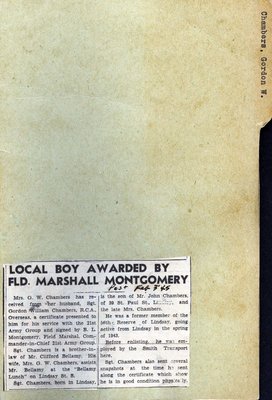