Enlisted September 18, 1942
Took his radar course at Central Tech., Toronto. He completed an advanced course in radar at R.C.A.F. No. 5 Radar School, Clinton, Ontario. He went overseas in February of 1944, and became attached to the R.A.F., Squadron 281. He also served at Wick and Tain, Scotland, then at Aldergrove, Ireland. Christie was serving at Coastal Command Stations. From the stations the fliers did air and sea rescue work, as well as providing the Air Ministry with Meteorological reports.

A drug apprentice with W. G. Dunoon, Rexall Drug Store, Lindsay, prior to enlistment, Cpl. Christie is welcomed back to this district. His discharge is expected February 16, 1946.

R. D. Christie’s home address is at present Box 14, Woodville, Ont.
Media Type
Text
Genealogical Resource
Item Type
Clippings
Notes
This card is part of a larger collection of World War II personnel clippings. The project began in 1944 at the Lindsay Library. The intent was to gather together as much information as possible on the military record and the service of people from the Town of Lindsay and the County of Victoria (now Kawartha Lakes) who served in the war. To that end, during the years 1944, 1945, and 1946, members of the public donated photographs and updated information about their loved ones. Both library staff and the public saved and donated newspaper clippings. Some of the files contain great amounts of detail, while others have just a name.
Date of Publication
18 Sep 1942
Subject(s)
Military education
Military training
Search & rescue operations
Royal Canadian Air Force
Royal Air Force
R.C.A.F. No. 5 Radar School
Coastal Command Stations 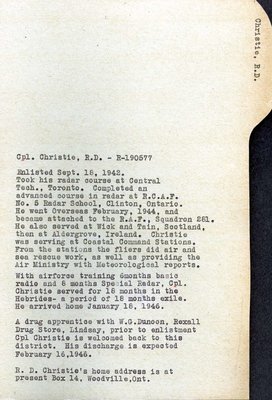