Cpl. Earl Carlton Chynoweth, son of Mrs. Mary Chynoweth, Norland, has been wounded while on active duty overseas with the Central Ontario Regt., a telegram recently received by his mother states.
The message also stated that further information would be forwarded as it was received.

Cpl. Earl Chynoweth of Norland, who was previously reported wounded is now convalescing in an English hospital.
Details of his wounds reaching his parents reveal that it has been necessary to have his right arm amputated.
He was serving as a stretcher bearer with his unit and he was wounded on July 18th in France.

Mr. and Mrs. Joseph Chynoweth of Norland, Ont., have been saddened by the official word they received to the effect that their son Cpl. Earl Carlton Chynoweth was seriously wounded on July 18th somewhere in France and since being admitted to the hospital has suffered the amputation of his right arm which was shattered by bomb fragments according to official information.
Capt. Chynoweth was born on a farm at Dongola, Ont., where he received his public school education, afterwards moving with his parents to Norland. He entered the Ordnance Corps in February 1942 and received his training at Toronto, Brantford and Camp Borden. In England he was transferred to the Royal Regiment Medical Corps as a stretcher bearer and was on duty a short time in France as a stretcher bearer when he received his injuries.

Norland Sept. 27 (Staff) – The home of Mr. and Mrs. Cheynoweth was the scene of a great rejoicing when their son Earl returned from service overseas recently. Earl has been overseas serving in a Medical Corps unit for over two years and lately has been on duty in France. He was wounded in the arm while with his Ambulance Corps and it was necessary to amputate owing to the shattered condition. He is completely recovered from this terrible experience and his many friends are proud to welcome him back to his home town. The young folks of the district met in the WI Hall on Friday evening last to give him a rousing welcome and engaged in a few hours of dancing and merriment.
Media Type
Newspaper
Text
Genealogical Resource
Item Types
Articles
Clippings
Notes
This card is part of a larger collection of World War II personnel clippings. The project began in 1944 at the Lindsay Library. The intent was to gather together as much information as possible on the military record and the service of people from the Town of Lindsay and the County of Victoria (now Kawartha Lakes) who served in the war. To that end, during the years 1944, 1945, and 1946, members of the public donated photographs and updated information about their loved ones. Both library staff and the public saved and donated newspaper clippings. Some of the files contain great amounts of detail, while others have just a name.
Publisher
Watchful Warder
Date of Publication
1944
Date Of Event
18 Jul 1944
Subject(s)
Amputees
Battle of Normandy
Military service
Normandy (France), Attack on, 1944
Royal Canadian Ordnance Corps
Royal Regiment Medical Corps
Soldiers
Soldiers -- Wounds and injuries
Surgery
World War II 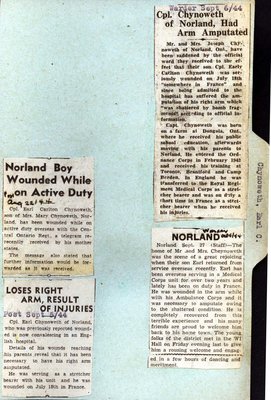