Full Text
February 21, 1945
NORLAND VETERAN WELCOMES HIS BRIDE AND CHILDREN
Cpl. Chynoweth lost an arm in Battle of Normandy—Bride Hails from London, England—Likes Canadian Hospitality.
As the evening train came to a standstill on Monday, there stepped on to the platform the wife and two children of Cpl. Earl Chynoweth, of Norland. The mother and children recently docked at Halifax and were met on arrival at Toronto by her husband, a veteran of the Normandy campaign, who returned to Canada about six months ago.
Cpl. Chynoweth lost his right arm when hit by a mortar shell shortly after D-Day, in the Battle of Normandy. He is the son of Mr. and Mrs. Jos. Chynoweth of Norland.
Enlisting in Toronto during the early part of the war, in the Royal Canadian Regiment, Cpl. Chynoweth went overseas and served in the theatre of war with that unit until being wounded, amounting to approximately two and a half years overseas service. His wife comes from Tottenham, London, England and when interviewed by a Warder representative stated that she was very much impressed by Canada, and when asked what she thought of Canadian people, said: I am overwhelmed by the kindness and hospitality I have received on every hand.
When questioned about bombing she stated that her mother had been bombed out twice. Cpl. Chynoweth is at present under hospital care and when asked as to his future plans, said he was undecided, but for the present he would make his home in Norland.
Media Type
Newspaper
Text
Genealogical Resource
Item Types
Marriage
Articles
Clippings
Notes
This card is part of a larger collection of World War II personnel clippings. The project began in 1944 at the Lindsay Library. The intent was to gather together as much information as possible on the military record and the service of people from the Town of Lindsay and the County of Victoria (now Kawartha Lakes) who served in the war. To that end, during the years 1944, 1945, and 1946, members of the public donated photographs and updated information about their loved ones. Both library staff and the public saved and donated newspaper clippings. Some of the files contain great amounts of detail, while others have just a name.
Publisher
Watchful Warder
Date of Publication
21 Feb 1945
Date Of Event
18 Jul 1944
Subject(s)
Amputees
Military service
Military spouses
Soldiers
war brides
World War II
Normandy (France), Attack on, 1944
Soldiers -- Wounds and injuries
Royal Canadian Ordnance Corps
Royal Regiment Medical Corps
Battle of Normandy 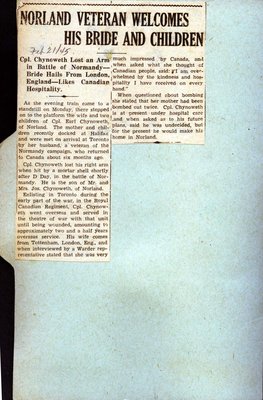