Full Text
August 22, 1944
Farmer in Whose Field Plane Crashed Hears Son is Injured
Mr. George Clarke, Ops Twp., the farmer whose field the R.C.A.F. training plane crashed on Saturday, called at the Post Monday afternoon to say that his son, Sgt. Harry A. Clarke, 28, has been reported seriously wounded while on active service in France.
Mr. Clarke stated that he had just received the message and that it stated his son’s wounds were confined to the left side of his face and his right arm.
Sgt. Clarke enlisted with the 45th Fld. Bty, R.C.A. in Lindsay exactly four days after war had been declared by Canada.
Sgt. Clarke’s wife and one daughter, Evelene, reside in Toronto.
A sister of the injured soldier, Mrs. Lloyd James, lives at 104 Regent St., town.


November 6, 1944
IS RECOVERING
Friends of Sergt. Harry Clarke, a son of Mr. George Clarke, will be glad to hear that he is recovering nicely from wounds recently received fighting the enemy.


October 12, 1945
The many friends of Sgt.-Major Harry A. Clarke will be pleased to learn that he will arrive home on Tuesday evening at 8 o'clock via C.N.R.
Media Type
Newspaper
Image
Text
Genealogical Resource
Item Types
Snapshots
Articles
Clippings
Notes
This card is part of a larger collection of World War II personnel clippings. The project began in 1944 at the Lindsay Library. The intent was to gather together as much information as possible on the military record and the service of people from the Town of Lindsay and the County of Victoria (now Kawartha Lakes) who served in the war. To that end, during the years 1944, 1945, and 1946, members of the public donated photographs and updated information about their loved ones. Both library staff and the public saved and donated newspaper clippings. Some of the files contain great amounts of detail, while others have just a name.
Publisher
Lindsay Post
Date of Publication
22 Aug 1944
Subject(s)
Aircraft accidents
Military life
Military service
Recruiting & enlistment
Soldiers
War casualties
World War II
Royal Canadian Army
Soldiers -- Wounds and injuries
45th Battery, RCA
12th London Battery 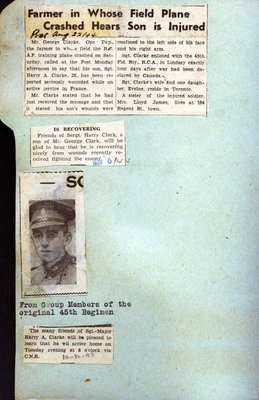