Full Text
March 9, 1944
ANOTHER LOCAL BOY BRINGS HONOUR TO COMMUNITY
THE KING AWARDS THE MILITARY MEDAL TO SERGEANT R. G. CLARKE
In recent war news one of our local boys has brought honour to himself and his community by his bravery in the Italian Campaign. He is Sgt. Ross G. Clarke.
Sgt. R. G. Clarke has been awarded the Military Medal by the King for outstanding valour in battle on the Italian front, near Ortona.
Sgt. Clark is one of a group of 59 who has been awarded this medal by the King. He was born in Lindsay, 1912, and resided here at the time he enlisted, in 1939, going overseas in June, ‘41. His mother, Mrs. Mary Louise Clarke, lives at Norwood, Ont.
His citation states he and his company were forced to evacuate two tanks which the enemy had put out of action; also a third tank which was hit by concealed antitank guns.
He successfully got his crew away and seeing the danger tanks were going to be subjected to, from these concealed enemy anti-tank guns, under heavy machine gun and mortar fire—he determinedly set out on foot for his Squdr. Ldr's tank. He was wounded on the way, but continued until he was able to direct the fire of his Squadron Leader against the concealed enemy anti-tank emplacement and aided in destroying the enemy gun and killing its crew.
When this was accomplished, he returned on foot to an ambulance post to receive medical attention. His conspicuous bravery and extreme devotion to his duty in the face of the enemy was undoubtedly a contributing factor to the success that resulted in the attack on Ortona.
Lindsay is proud of her warrior sons. Their spirit and courage has helped greatly in many seemingly hopeless situations, on land, sea, and air activities.
The Post joins his many friends in praise of his worthy deeds and congratulates him on winning the Military Medal.
Media Type
Newspaper
Image
Text
Genealogical Resource
Item Types
Articles
Clippings
Snapshots
Notes
This card is part of a larger collection of World War II personnel clippings. The project began in 1944 at the Lindsay Library. The intent was to gather together as much information as possible on the military record and the service of people from the Town of Lindsay and the County of Victoria (now Kawartha Lakes) who served in the war. To that end, during the years 1944, 1945, and 1946, members of the public donated photographs and updated information about their loved ones. Both library staff and the public saved and donated newspaper clippings. Some of the files contain great amounts of detail, while others have just a name.
Date of Publication
9 Mar 1944
Subject(s)
56th Anti-Tank Regiment
Campaigns & battles
Heroes
Military life
Military Medal
Soldiers
War - Anecdotes
World War II 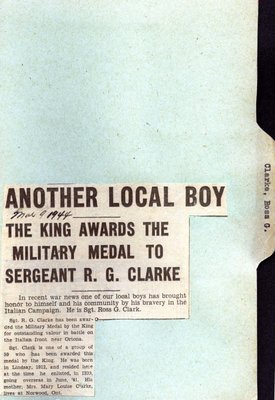