Full Text
August 4, 1943
T. Clayton Gets 2 Promotions Overseas
Has 2 Brothers in the Armed Forces
Beaverton, Aug. 31—Tom Clayton son of Mrs. Clayton of Beaverton went overseas in 1941 as L.-Cpl.
This spring he became a Corporal. Just recently his mother received word that he was promoted to rank of Sergeant. Tom is a gun instructor in a Tank Regiment. His many friends are pleased to hear of his splendid progress.
Tom has two brothers, Bob and Don, enlisted in the army who have not gone overseas yet.


July 25, 1944
Cpl. Clayton of Beaverton is Injured
Word has been received by friends and relatives at Beaverton that Cpl. Tom Clayton of that town, stating that he has been injured in action.
Cpl. Clayton is attached to a Canadian Army Tank Corps and fighting in Italy at the time he was injured.
He has been overseas for the past three years with his unit.
Best wishes for his early recovery are sent from his home town friends.
Media Type
Newspaper
Text
Genealogical Resource
Item Types
Articles
Clippings
Notes
This card is part of a larger collection of World War II personnel clippings. The project began in 1944 at the Lindsay Library. The intent was to gather together as much information as possible on the military record and the service of people from the Town of Lindsay and the County of Victoria (now Kawartha Lakes) who served in the war. To that end, during the years 1944, 1945, and 1946, members of the public donated photographs and updated information about their loved ones. Both library staff and the public saved and donated newspaper clippings. Some of the files contain great amounts of detail, while others have just a name.
Date of Publication
4 Aug 1943
Subject(s)
Canadian Army Tank Corps
Promotions, Military
Royal Canadian Army
Soldiers
World War II 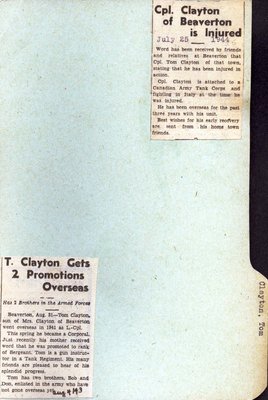