A Special Memorial Service in memory of five young Coboconk men who have paid the supreme sacrifice on world battlefronts in the present conflict, was held in Christ Church, Coboconk, on Sunday, September 3.
Rev. Mr. Green, of Fenelon Falls, conducted the service, bringing a consoling and helpful message to all. At the conclusion of the Church service, the Coboconk Platoon of the 2nd Midland Regt, (R) marched from the church to the cenotaph where wreaths were placed and prayer was conducted by the minister.
Wreaths were laid in memory of Lloyd Wakelin, Allan Olsen, Kenneth McGregor, James Sheldon, and Lloyd Truax, by Richard Rutter, an Army Veteran, and by Jack Mackie, R.C.A.F.
An outgrowth of the service has been the setting up of a Memorial Fund to which contributions will be accepted by Garnet Graham, secretary, or Charles Bowins, Treasurer.

Citizens of Coboconk and vicinity have reason to be proud of the large number of men from that community serving in the Armed Forces, some eighty persons from this small centre being on service in various parts of the world.
With the thought in mind of making some tangible acknowledgement of this service, steps are already under way to arrange for the building of a new Memorial Hall in honour of those who served and will return to partake of its benefits and in memory to those who gave their all for King and country.
The plan developed from discussions held among the citizens of the community as to the best means of showing appreciation to those who served and the Memorial Hall plan has been widely accepted as the most desirable. Not only will it be a Memorial to the fallen, but it will provide those who return and their succeeding generations, a suitable place in which to conduct and enjoy community activities.
A plaque will be placed in the new Hall with all the names of those who served suitably inscribed.
A public meeting to discuss the entire project has been called for Friday evening, March 30 in the Masonic Hall, Coboconk to which local members of Provincial and Federal Governments have been invited and where complete details of the proposed plan will be dealt with.
While other communities are considering ways and means of honouring their war heroes, Coboconk will be among the first to put a definite plan into operation.
Media Type
Newspaper
Text
Genealogical Resource
Item Types
Death
Articles
Clippings
Description
Raymond Lloyd Wakelin, 30 September 1942, Royal Canadian Air Force

Notes
This card is part of a larger collection of World War II personnel clippings. The project began in 1944 at the Lindsay Library. The intent was to gather together as much information as possible on the military record and the service of people from the Town of Lindsay and the County of Victoria (now Kawartha Lakes) who served in the war. To that end, during the years 1944, 1945, and 1946, members of the public donated photographs and updated information about their loved ones. Both library staff and the public saved and donated newspaper clippings. Some of the files contain great amounts of detail, while others have just a name.
Publisher
Watchful Warder
Date of Publication
13 Sep 1944
Subject(s)
Death
Memorial rites & ceremonies
Military service
Soldiers
World War II
War memorials
Royal Canadian Air Force
Irish Regiment of Canada
2nd Midland Regiment (Coboconk Platoon)
Black Watch of Canada 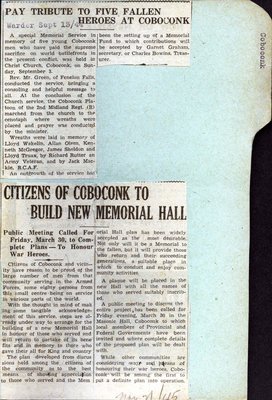