Full Text
September 11, 1945
Lloyd Coneybeare, who has spent a month at Greenwood, N.S., has been released from the R.C.A.F. Lloyd spent 3 ½ years overseas.
Media Type
Newspaper
Image
Text
Genealogical Resource
Item Types
Clippings
Snapshots
Description
Lloyd Coneybeare joined the R.C.A.F. on September 18, 1940 at the age of 21. He had his training in Toronto, St. Thomas, and Trenton. In Trenton he became a Leading Aircraftsman. He was in Canada one year, three months and on January 1, 1942 he left Haliburton for overseas duties. He landed in England January 22 and spoke over the radio on February 24. While training in Canada he took up parachute packing. After being overseas a few months he received his Corporal stripes. He was discharged in September 1945.
Notes
This card is part of a larger collection of World War II personnel clippings. The project began in 1944 at the Lindsay Library. The intent was to gather together as much information as possible on the military record and the service of people from the Town of Lindsay and the County of Victoria (now Kawartha Lakes) who served in the war. To that end, during the years 1944, 1945, and 1946, members of the public donated photographs and updated information about their loved ones. Both library staff and the public saved and donated newspaper clippings. Some of the files contain great amounts of detail, while others have just a name.
Publisher
Lindsay Post
Date of Publication
11 Sep 1945
Subject(s)
Military discharges
Soldiers
World War II
Royal Canadian Air Force
Personal Name(s)
Lloyd Coneybeare
Collection
World War II Service Files
Language of Item
English
Copyright Statement
Copyright status unknown. Responsibility for determining the copyright status and any use rests exclusively with the user.
Contact
Kawartha Lakes Public Library
Email
WWW address
http://www.kawarthalakeslibrary.ca
Agency street/mail address
190 Kent St W.
Lindsay, ON K9V 2Y6
(705) 324-5632 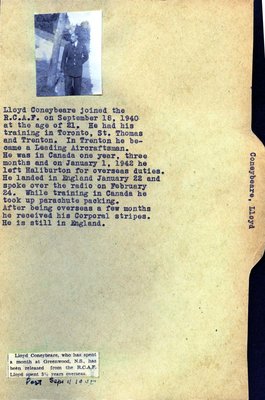